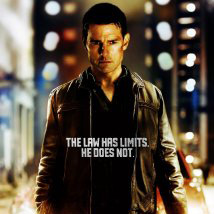 First off let me say that I have not read any of the *Jack Reacher* books so I can’t say how well they did or didn’t translate the character into the movie.

There was very little about the movie not to like. There was only one scene – that I don’t want to spoil – that made me think, “That was an unrealistic Hollywood scene.” Other than that I thought it was very believable.


There were a number of times that the audience laughed. Nothing hysterical, but lines that definitely got some good solid chuckles.

One of the things that impressed me was how well the story of the investigation flowed from one clue to the next. All too often detective/mystery stories get lazy at one point or another, and have these scenes where the logic goes from A -> C, without explaining what B was to the audience. I was also happy there was never a scene where Jack Reacher came to some conclusion that appeared to be too big a leap – like Sherlock Holmes does. That works well for Sherlock, because that’s what those stories are about. But Reacher is just a good detective that pays attention. I never saw him reach conclusions that didn’t seem realistic.

The other impressive aspect of the movie was the dialog. It felt real. There were a few times Reacher tried to explain something and just didn’t do a good job of it, and then had to try and explain it another way. That’s real conversation. It felt like real people talking, most of the time, instead of actors reading a script.

I expect some people will complain that the villain was too cardboard. But I’m going to let that slide. The movie isn’t about the villain. We have one scene that gives us all we need to know about the character. But then, who really cares? The movie is about Reacher. The story rightfully kept the focus on him.

All in all, it was solid entertainment. I’m looking forward to more of the same if this movie becomes a series.