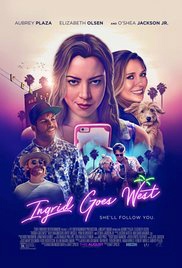 Ingrid Goes West could have taken the path of becoming a nasty, bloody horror flick. All the ingredients are there: a mentally disturbed antagonist (Ingrid), a somewhat naive protagonist (Taylor), a hapless boyfriend (Dan), and a whole gaggle of mean girls. Instead, we’re given a dark dramedy, full of raw emotion.

This is not a movie for everyone, but if you belong to that subculture of obsessive Twitter/Facebook/Instagram/ Snapchat users that cannot ever go to the toilet without a phone in hand, you’ll relate to the movie.

I was impressed with the acting, directing, and writing of Ingrid Goes West; hats off to Matt Spicer, Aubry Plaza, and Elizabeth Olson — the younger and more sane sister of the Olson twins.


You’ll leave the theater feeling either sad, depressed, or enlightened, but you will feel something.

About The Peetimes: This movie provided 2 good Peetimes, one at 45 minutes, and one at 1:13 minutes. Both give you 4 minutes to break, so let your bladder decide.

There are no extra scenes during, or after, the end credits of Ingrid Goes West. (What we mean by Anything Extra.)

Rated (R) for language throughout, drug use, some sexual content and disturbing behavior
Genres: Comedy, Drama