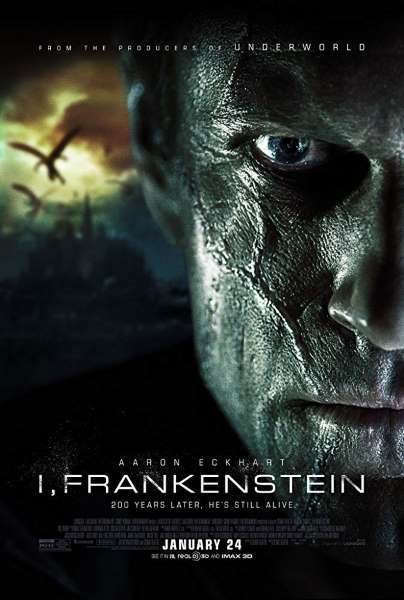 What I found most surprising about this movie is the quality of the acting. Usually movies like this pluck their main characters from the B-list. But somehow the creators managed to land Aaron Eckhart, who is an outstandingly good, but underrated, actor. Eckhart brings gravitas to the character of Frankenstein that the story depends on. Without him, this movie might have been rubbish.

More surprising yet, they got Bill Nighy as the lead for the evil demons. Nighy did a fantastic job of showing a character that can just barely manage to keep a seething anger under control. It feels like his character wants to smash everything to bits, but he knows that won’t be an effective strategy, so he keeps his cool and pursues a more complex plan of attack. Bill Nighy is one of my favorite actors because he has such an astonishing range.

The rest of the cast is pretty much the B-listers, but that doesn’t mean they can’t act. Jai Courtney, John McClane’s son in “A Good Day To Die Hard”, Miranda Otto, Eowyn from “Lord of the Rings”, and Yvonne Strahovski, from the TV series “Chuck”, all do a fine job with what they have to work with.

Where the movie suffers is in the storytelling. First, they only have 80 minutes of actual movie time to tell a story that involves a fairly rich and detailed universe. Or at least it could have, if they had made the movie an hour longer and given the audience a chance to see the universe they created, instead of spoon feeding every little detail with heavy handed exposition. Let’s put it this way: if Peter Jackson had directed this movie, it would have been a trilogy with nine-plus hours of screen time. 🙂

This movie was better than I expected, because I was expecting it to be rubbish, but ultimately is unsatisfying because of the heavy-handed storytelling and brevity.

About The Peetimes: Both Peetimes are pretty good but I’d recommend the 1st. The movie is only 80 minutes long, excluding the end credits. The 1st Peetime is mostly a long, slow, scene with no dialog, but it ends with a short fight. The 2nd Peetime has a lot of exposition that is easy to sum up. Note: if you want to see the best shot of Frankenstein’s (Aaron Eckhart) physique then don’t use this Peetime.

There are no extra scenes during, or after, the end credits of I, Frankenstein. (What we mean by Anything Extra.)