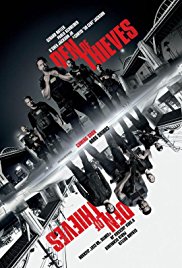 I think Den Of Thieves tried hard to be a good tale. Basically, we see that the good guys and the bad guys are not so different, and act the same ways to get their jobs done. [pullquote position=”right”]We feel sympathetic for both sides occasionally. But mostly, we see that everyone in this movie are jerks.[/pullquote]

The big problem is that none of the characters are developed to the point that we even know their names, or care. There are minor sequences with Nick’s life, but honestly, those just make great Peetimes. I’m not sure why they bothered to show those scenes — they have nothing to do with the plot, and felt squashed in to give Gerard Butler something to do besides…shoot things. As of 2017, he’s our new B Movie action hero, right?

[pullquote]I like a good caper, mystery, or thriller, but this is NONE of those.[/pullquote] I’d say to wait for the DVD if you must see it, but only bother if you want to see guns going BANG BANG BANG for the entire second hour. Really. BANG: by this time, any semblance of storytelling was abandoned. I got a headache from this movie. It’s shocking how so much time was wasted in such a long film, without developing anyone beyond “barely good guy,” and “barely bad guy.”
-----Content continues below------


Even that premise sounds good, doesn’t it? It’s not. I wanted to go home after the the first hour mark passed. I thought about leaving and pretending I saw the end, I kid not. I’ve watched a LOT of movies for RunPee and put up with all kinds of plot disappointments. This was just abysmal.