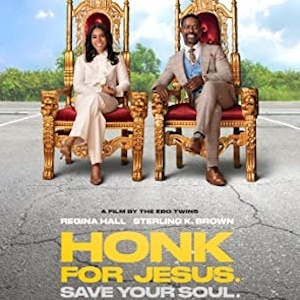 Honk for Jesus. Save Your Soul. is a satirical COMEDY starring Regina Hall as Trinitie Childs – the proud first lady of a Southern Baptist megachurch, who together with her husband Pastor Lee-Curtis Childs (Sterling K. Brown), once served a congregation in the tens of thousands. But after a scandal forces their church to temporarily close, Trinitie and Lee-Curtis must try to reopen their church and rebuild their congregation, hoping to make the biggest comeback that commodified religion has ever seen.

The biggest part of that description is that it’s classified as a comedy on IMDb. Not a religious comedy. Let me say that again to be clear. This is not a religious movie. There are definitely religious elements in this movie. Audience members that are very religious, might not like some of the pokes and laughs that they take at westernized organized religion. But there are other jokes in the movie. It’s not all about religious jokes. Some of them are definitely situational humor. Like the differences of how the power couple represents themselves publicly versus how they are privately. The mockumentary style reminded me the Office. Where sometimes you couldn’t believe what the camera caught. And the other people being filmed, react without thinking that the cameras are there. Fun times.

Now as far as the reveal of the scandal information, it potentially could not sit well with everyone. I think they did it tastefully and didn’t go into too much detail. But you get the gist of what happened. I’m going to give you one spoiler. If you don’t want to read it. Skip to the next paragraph. Nothing to do with children, but they were young adults. Per one comment in the movie, 18 to 20 years old. Legal age and consenting. Back to the rest of the review.


This could be just regional and demographic points, but here in the Midwest and in a very mixed crowd. But this movie made the audience and myself laugh out loud at many moments in this movie. So it hit the mark for me personally. I enjoyed it. I thought it was a good time. Definitely not one that I need to rewatch again. I’ve seen it once and got what I needed out of it. I still would recommend checking it out if you don’t mind the religious-themed but satirical and situational comedy movie. Enjoy the show.

Would I rewatch it?
No need.

Must-see in theaters?
This movie does not require the big screen or sound. The story could transfer to the small screen.

About The Peetimes: This movie has some funny moments so it’s hard to get around all of them. I found 2 Peetimes. There’s no recommended time. Do what is best for you.

There are no extra scenes during, or after, the end credits of Honk for Jesus. Save Your Soul..

Plot
In the aftermath of a huge scandal, Trinitie Childs, the first lady of a prominent Southern Baptist Mega Church, attempts to help her pastor-husband, Lee-Curtis Childs, rebuild their congregation.