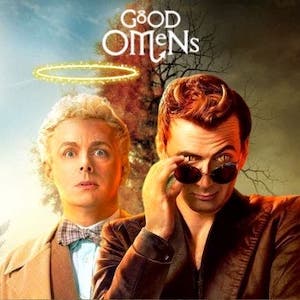 Good Omens was based on the book of the same name. Well, it was based on the book called Good Omens: The Nice and Accurate Prophecies of Agnes Nutter, Witch. This was a collaboration between the two most imaginative and creative writers of modern times; Terry Pratchett and Neil Gaiman. As a result the Good Omens six part mini series was a marvellous production which, very wisely, followed the book quite closely.

Throw in a brilliant cast led by David Tennant and Michael Sheen and there is absolutely no surprise that it was classic entertainment which I’ve watched several times already and doubtless will do again. I wasn’t alone; it gathered very positive reviews and ratings all over the place. Errm…apart that is from one US based religious group who took offence at the subject matter  and set up a petition to get Netflix to halt production. As is often the case, this group hadn’t properly done their research as was demonstrated by the fact that the whole thing had already been released in full and on Amazon Prime to boot.


What is Good Omens Season 2?

Given that the first series followed the entirety of the book and we’ve, very sadly, lost Terry Pratchett you do have to wonder where the second series is going to come from. Apparently though, before he died STP and Neil did talk about where they thought that the Good Omens story could go next. These chats are what the new series will be based on.

Neil Gaiman returns as the show runner and Douglas McKinnon comes back as director. As for writing duties, obviously Sir Terry is no longer with us but Neil Gaiman has brought on board one of the top comedy writers and performers you’ve probably never heard of…John Finnemore. If you look at his IMDb credits it doesn’t look like he’s done a lot of work. That, however, is down to there not being a lot a mention of all his radio work. He is very, VERY funny and I look forward to seeing his contributions.

Mr Tennant himself has announced that it’ll be Summer 2023!

It’s not been released yet so you’ll need to keep checking back.

The magical Sheen/Tennant partnership will be back as the angel Aziraphale and the demon Crowley. The League of Gentlemen (Shearsmith, Gatiss, and Pemberton) are back. It seems that Frances McDormand can’t come back as God but we do have John Hamm back as Gabriel.

The usual Pratchett/Gaiman mixture of biblical and other mythological characters. Quite appropriately as God (Francis McDormand) can’t come back they are introducing the angel known as the voice of God, Metatron being played by the national treasure that is Derek Jacobi.

What will you need to know before seeing Good Omens 2? To be honest, the whole thing is being written from scratch so there is no clue what you need to know beforehand. My guess is that Crowley and Aziraphale are hoping to settle back into their very long and settled lives but something is bound to turn up and throw a spanner in the works. Just treat it as an excuse to rewatch the first series.

Long term…who knows? To be honest probably very few people outside of the Gaiman household would have thought that this one would have happened so my guess is that it will all depend on how well this one does.