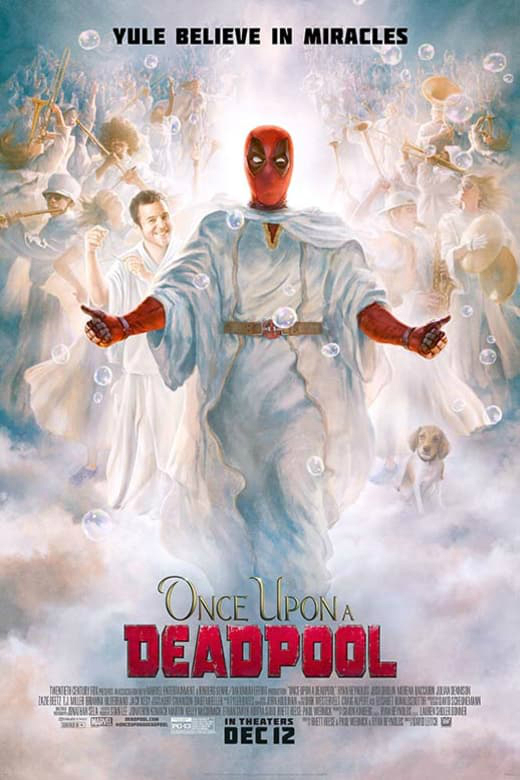 The Deadpool Before Christmas was hard to grade. I had to wonder if it’s better than the original Deadpool 2, if it added anything impressive to the canon, and if it’s worth spending your cash on what amounts to a re-tread of the same movie you saw last summer.

For real Deadpool fans, this is a must-see limited edition special event. Even for Princess Bride fans, you’ve got to get yourself out to see the painstakingly recreated bedroom for Fred Savage’s character, and to listen to him telling off Deadpool over the course of the film.


Also, Savage really wants to “fight” Matt Damon. As in REALLY REALLY, although it might not be “fight” so much as “[email protected]”…if you’ve seen the Sarah Silverman parody song about Matt Damon, followed by the segue about Ben Affleck, you’ll know what I’m talking about. If you’re old enough to permit some cussing in your humor, go look for it. Otherwise, ask your parents for some help.

The added Princess Bride footage was swell, from opening scene til the penultimate extra where Fred is finally permitted to go home. I wish there was more. The entire last third of the film had me waiting impatiently for new footage. My thought is that by then, the producers didn’t want to cut into the flow of the actual Deadpool story, but screw that — I came for more of the new wacky goodness.

One thing I found disappointing was how seamless the dirty language was. Instead of hearing some cool, really bizarre dubs, I barely noticed this was PG-13. I figured Deadpool would insert fun weirdo ‘curses’, like “you dirty hamburger monkey” for PG-13 friendly curses (shit and bitch are apparently okay, ya’ll), but, again, I didn’t notice the lack of the really R rated words. The ONLY fun cussing scene is the above-mentioned Matt Damon sequence with Deadpool bleeping out “fight.” Try not to run and pee then!

Also fun were a couple of scenes where certain body parts were pixellated. One in particular was super-maxi handy, since eyeball bleach can be hard to come by.

I also noticed a few neat things I missed on my previous DP2 viewing. One is all the insistence on DP’s part that he’s in a Marvel film. Also, as he talks to Juggernaut: “The sun is getting really low, big guy,” which is a certain someone’s sweet way to talk down The Hulk in another franchise. And, the dial we keep seeing Deadpool use “goes up to 11”, as we’re told in another old classic film: This Is Spinal Tap.

So, yeah. A few gory/graphic moments were cut, and some barely cleaner language was inserted, but this is absolutely the same DP2 you saw before, with 15 minutes of Princess Bride mashup interspersed.

Some people complained this was just a cash-grab by Fox and Marvel, but it’s still a unique way to re-package old material…plus Ryan Reynolds insisted a portion of the proceeds go to a “Fudge Cancer” charity…so you can feel good plopping out your money for this particular grab.

One last point: all the amazing cameos from the original DP2 are still in play. Dan’s first review of DP2 lists them all, so I’m not going to retread that — I just linked to his review. Sound good?

Last, last, last note: DO NOT LEAVE UNTIL IT SEEMS LIKE THE LIGHTS WILL BE COMING BACK UP. You’ll kick yourself if you miss the final cameo. Trust.

About The Peetimes: Don’t use the original Deadpool 2 Peetime information. This PG-13 special has an extra 15 minutes of story footage, and a new extra scene after the credits. This version has different Cue times. In certain places I listed NEW scenes, in case you don’t want to hit the bathroom for those. The 2nd Peetime was recommended in the original Deadpool 2, but I removed that because it has a NEW scene in it. I listed the 1st Peetime as recommended instead, because it was easy to sum up and gives you an extra minute if you need it. Try to use it proactively! 🙂

There are extra scenes during, or after, the end credits of Once Upon A Deadpool. (What we mean by Anything Extra.)