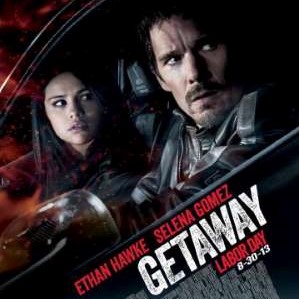 Getaway is only about 82 minutes long — excluding the end credits. I didn’t time it, but I don’t think it would be an exaggeration to say that roughly half of the movie involves car chases. So, if you like car chases, then you probably won’t be disappointed. However, I found the car chases to be rather repetitive. Almost every chase was a team of cops chasing the Shelby Cobra — I think there were two chase scenes that didn’t involve cops.

Seriously, there’s not much acting involved, and no one is going to see this movie for that reason. The plot is spoon-fed in very obvious chunks to the viewer. There isn’t anything to figure out.

The only thing I didn’t like about the movie was the unbelievable abuse the car took without serious damage. I know they said that it was armor plated, but after crashing through crates of boxes I’d expect some damage to the headlights at least. And when the bad guy is shooting the car with a machine gun, with no effect, does it not occur to them to shoot the tires? Am I just over-thinking it?

And one more thing: the car went all night through countless chases, and never needed to be refueled? I don’t know about that.

About The Peetimes: It’s a short movie, about 82 minutes excluding the end credits, so there’s only one peetime. The peetime I did find is really good and you’ll only miss the beginning of a chase scene if you take the entire 4 minutes.

There are no extra scenes during, or after, the end credits of Getaway. (What we mean by Anything Extra)