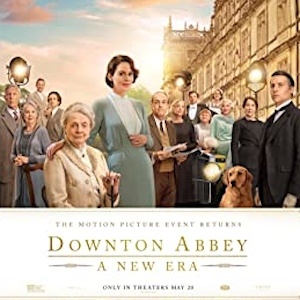 Downton Abbey 2: A New Era is a beautiful mess. It absolutely did what it set out to do, which is provide comfort viewing for long-time fans. With six seasons, two movies now, and a cast that won’t quit growing, casual fans will probably just be stopping by for the costumes and pageantry.

Fortunately, those things Downton can always be relied on to provide. A New Era presents Downton and her people as beautifully as ever, wrapping the viewer in a fabulous fantasy where Lords and Ladies mingle while the servants giggle, and everyone loves their shenanigans.


Most of the time when a cast gets this far out of hand (I stopped counting after about 50 named characters), something has to suffer. The choices are: excise the cast, trim away plot, or try to balance the two and not exactly wind up with something good.

What Downton Abbey 2 fortunately did was remove almost any semblance of plotline. I’d call it ‘plot-light.’ By now the producers have figured out fans mainly want to see their beloved characters above and below the stairs, have them say quaint/twee or passionate things to each other, in an exciting time period. Almost all the fan favorites get something worthwhile to do. This would make a good movie to rewatch because of all the reaction shots and fun little throw-away lines.

Also, if you just want to see the Dowager Countess (Dame Maggie Smith, at her most acerbic) take everyone out verbally while amusing herself greatly. she doth provide. Smith could make a whole movie of Lady Violet sniping away at everyone in range and it would be GLORIOUS.

So, the plot? Such as it is? Covers the transition from silent film to ‘talkies’. There are a few good lines about the worth and value of movies that seem pretty on the nose for times like these. There’s other stuff with inheritance and birthrights and heirs and Mary’s love-life — everything people should be used to in this series.

Overall, DA2: A New Era is streets ahead of the first Downton Abbey movie, which didn’t suck per se, but went plot-heavy and suffers upon rewatch. While I skimmed the first movie again and cherry-picked a bunch of episodes to get ready, surprisingly, none of this was necessary. I think if anyone is familiar with period shows like Emma., The Tudors, Pride & Prejudice, or Bridgerton, they’ll know what to expect, more or less. Or just watch Gosford Park, the 2001 Julian Fellows movie that was about Downton before he came up with Downton.

Another option for directors with insane cast lists: make a movie looooonger. A New Era is over 2 hours. It stays light on its feet, doesn’t drag, and uses the runtime wisely. This made it harder to find Peetimes; I tried to stick to the aforementioned ‘plot’ bits (which are easily described in the app) so all of the fun character moments get a chance to shine.

For casual fans, this is a solid B. For not dragging the long-suffering, long-term fans through certain unpleasant storylines that dragged on in the past (as with the Bates’ various agonies and Tom’s politics), I’ll go with a full B+ and a fervent ‘thank you’ to Mr. Fellows.

About The Peetimes: There are a lot of characters to check in on by this time in the series, and each of them gets a little moment or two. That makes it both hard and easy to get Peetimes. I recommend the 2nd and 3rd Peetimes. It gets harder to find a decent Peetime as things progress, so be proactive with your bladder! Note: there was a Timer snafu—my bad. Sorry that the Timer cue comes after the movie starts.

There are no extra scenes during, or after, the end credits of Downton Abbey: A New Era.

What You Need to Know to Watch the Downton Abbey Movie

Plot
Follow-up to the 2019 feature film in which the Crawley family and Downton staff received a royal visit from the King and Queen of Great Britain.Plot summary.