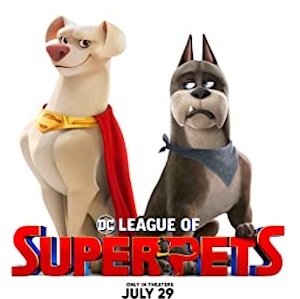 DC League of Super-Pets was a good kids’ movie. I’m basing my review solely on the targeted audience. Little kids. The humor was there for them, there were some great moral lessons going on and the animation looked really cool for kids. This isn’t one of the kids’ movies that adults are still entertained in sly ways. I was bored but my 9-year-old granddaughter loved it. She only had one complaint and that was the terrible sadness that has to do with Ace’s backstory. That was rough on her. I noticed a few kids in my theater crying. It was definitely relatable to real-life lessons. They did it in a smooth way but the hurt was still there. She’s recommending a B+, I think I’ll use her grade since she was the targeted audience.

The unstoppable duo of The Rock and Kevin Hart was certainly delightful. Those two go together like peanut butter and jelly. I’ve enjoyed every movie they have done together until this one. Again, I’m not saying it was bad, I just didn’t feel the chemistry between the two. As I thought about it last night I decided it was because I didn’t see them. They’re funny on screen in real life, the animation took their chemistry away.


I will still recommend this movie for a weekend family fun date. Simply go in knowing that it’s only geared towards the kids, us adults were left out of this one.

About The Peetimes: I would really recommend the 2nd Peetime. It’s a sad scene that made a lot of the children in my theater cry.

There are extra scenes during, or after, the end credits of DC League of Super-Pets.

Plot
When the Justice League are captured by Lex Luthor, Superman’s dog, Krypto, forms a team of shelter-pets who were given super-powers: A hound named Ace, who becomes super-strong, a pig named PB, who can grow to giant-size, a turtle named Merton, who becomes super-fast, and a squirrel named Chip, who gains electric-powers.

chevron_left RunPee Weekly Newsletter #124 (July 27th, 2022)
Is there anything extra during the end credits of DC League of Super-Pets? chevron_right