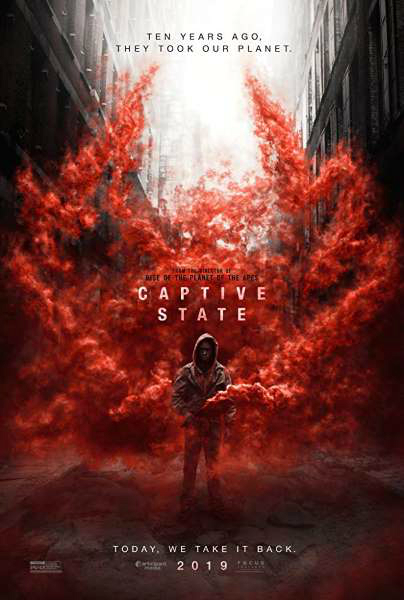 Captive State had a good idea of dropping the movie goer right into an alien invasion. The aliens have been in control of earth for years and are known as “legislators.” They control the law and humans.

Okay, great idea up to that point. It’s a dandy way to start a movie. I like the idea of seeing how the humans and aliens basically have to work together. That’s where the greatness ends. The mere idea of it. The execution was retched, absolutely discombobulated and confusing.

It’s really an hour and a half give or take of humans passing messages and traveling from one secret location to another secret location. I honestly didn’t even know the characters names until I got home and looked them up on IMDB.


One of my biggest gripes is John Goodman. I’ve loved that guy since the beginning of Roseanne. He is a staple in the strong male actors category. Did he have bills to pay? Why in the world did he take this role? The character was written so poorly that even the great Goodman couldn’t bring life to the role. Sad face.

The only reason I’m not giving this movie an F is because the sets were done really well. They immersed you into a bleak, poverty stricken world that oozed with desperation and hopelessness. Good job there.

Another positive note was that while doing my job I have to sit through the credits to tell you wonderful people if there is anything extra. Happily they were only four minutes long. I thought to myself, “Wow, those credits were really short. Woohoo for that!” Most movies run at least 7 minutes, sometimes longer. I figured out why as I was falling asleep last night trying to forget this movie. The credits are so short that no one wanted to take credit for this farce of a movie. I chuckled to myself as I fell into a peaceful sleep that luckily contained no part of this movie in my dreams.

Treat yourself to a wonderful movie and get out of the house for a while. You deserve it! I just wouldn’t pick this one.

About The Peetimes: I only submitted 2 Peetimes due to the fact that this was a really hard movie to follow. I chose scenes that were fairly easy to summarize.

There are no extra scenes during, or after, the end credits of Captive State. (What we mean by Anything Extra.)