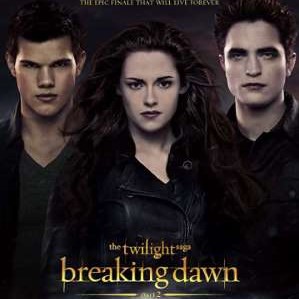 Epic ending to an epic saga! I enjoyed the other movies but I loved this one. Luckily I got to see the midnight showing. Personally I love these crowds. When something crazy goes down on the screen the midnighters have something to say about it. The theater was roaring during the final twenty minutes of the movie. Even those guys that I could tell were dragged by their girlfriends were stomping the floor. It was Twilight mayhem!
My biggest complaint throughout the series has been Kristen Stewart’s acting. She constantly looked like she was in pain. Not emotional pain but more like, “Oh my gosh my stomach hurts kind of pain.” I don’t know if that was because Kristen was a fairly inexperienced actress or if she was directed to act that way so when this movie came out and she kicks major vampire butt you would think, “Wow man, Bella got her groove on now!” Once Bella died, Kristen Stewart came alive. I have forgiven her past behavior/acting.

Mackenzie Foy really stole my heart. Just looking at that little girl made me feel peaceful. I’m not sure if she is just an amazing little actress or if she is just naturally captivating. She was perfect for the role.

Another aspect I really liked is the relationship that Edward and Jacob developed. They had quite a few scenes that made me laugh out loud. There is also a scene between Jacob and Charlie (Bella’s Dad) that had me rolling on the floor in laughter. This movie just oozed chemistry between the characters.


In the final action scenes I was literally on the edge of my seat. I did not read the books so I didn’t know how the story unfolded. I was actually an emotional wreck. I will not give away any spoilers here so I will leave it at that.

About The Peetimes: In my opinion the second pee time is the best to use.

There are no extra scenes during, or after, the end credits of Breaking Dawn – Part 2. (What we mean by Anything Extra)