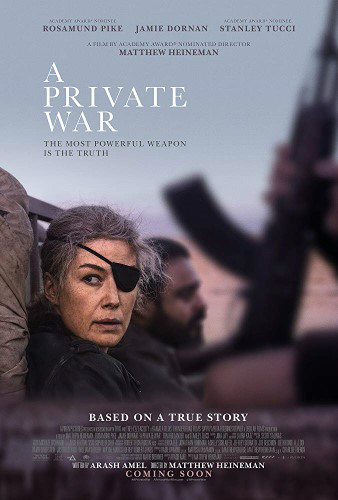 I’ll start this review by getting one thing out of the way. I’m giving A Private War an A grade, which I don’t award often. And in this particular case, it’s something of a surprise that I’m not failing it with an F.

Let me explain: I had a terrible time with this film. It’s brutal, and this is exactly the sort of movie I need to avoid. I only sat though it to the end because it’s my job…as Marie Colvin says, “I see these things so you won’t have to.”

I honestly don’t think anyone could sit through this and say they had a good time. I had to wrack my brain to come up with the target audience for it. (More on that in a second.)

I’ll start with the good: [pullquote]Everything in A Private War is indicative of top shelf movie production. The acting, soundtrack, lighting, set design, nonlinear storytelling, characterizations, direction, everything. It’s like this film was created as Oscar bait. [/pullquote]I’m sure it will win a lot of awards. (And that’s the target audience. The Oscar Committee. )

I recently watched Gone Girl for the first time, and it was a surprise to see Rosamund Pike again in this. She knocked this out of the park, carrying almost the entire movie by her lonesome. Pike seems to specialize in portraying complicated characters who make questionable choices, then see their lives spiraling out of control. She does this very, very well.

[pullquote position=”right”]The only other “character” to rival her powerful performance was the war setting itself. The director and crew crafted an indelibly inedible smorgasbord of the gruesome ferocity of war, and the effect it has on the bodies and minds of the unwitting people damaged by it.[/pullquote]

Or even on the people going there on purpose, like Pike’s Colvin: a real person, on a real mission, who deliberately sought the worst places on the planet as fodder for her war column.

So, here’s the bad: This is a really terrible movie that no one should have to endure. By the time the parade of grotesquely mangled bodies is done you’re done — done in. I had to wash my mind out with soap. And then I sat in again to Fantastic Beasts 2 for a while, just to feel like myself and not a war torn victim.

[pullquote]This movie relentless bombards you with extremely graphic imagery of mangled bodies and violent, disturbing imagery.[/pullquote] For example, there’s a scene where a throng of war correspondents stare silently at the body of one of their own. Or rather, what’s left of him.  You get to see it too: this is the stuff nightmares are made of.

We’re also bombarded by bombardment: endless mortar explosions, gunshots, pounding artillery, and automatic rifle salvos provide a sensory overload that will make your head ache and ensure you won’t sleep well that night. But it will most probably win awards, and is effective at getting across a message we should all understand by now: that war is hell, and the people who wage it are the real demons.

About The Peetimes: This isn’t a short movie, but every scene is either action-filled, or emotionally resonant. I have 3 Peetimes avoiding the war action. I recommend either the 2nd or 3rd Peetimes, as the 1st has an intense series of emotional cut-aways, but will still serve — the whole film is intense, and you won’t miss anything that won’t be shown later. Alert Peetime Note: This film is very graphic. For example, we see images of dead people with their lower torsos blown off, with their intestines spread all over the floor. I will probably add a few Alert Peetimes later, but you should realize that around a third of the movie is disturbing.

There are extra scenes during, or after, the end credits of A Private War. (What we mean by Anything Extra.)