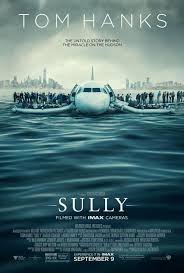 Let’s just open with this axiom: Tom Hanks can do no wrong.

That’s not much of a review, is it?

Starting again: I just watched Sully last night for the first time. Somehow, I never heard about “The Miracle on the Hudson.” I shy away from the news, because “news” usually equals “bad news” and I don’t need any more of that. But in this case, as with The Apollo 13 mission, the story fell into the rare “good news” category.

Funnily enough, both Sully and Apollo 13 star Tom Hanks. This man can really lead a film — and I kind of felt, watching Sully, this was a bit like “Apollo 13 with Planes.”

Take a situation where the wrong split-second decision (here it’s a 32-second decision) means a loss of all hands.  155 people survived because Captain Chesley Sullenberger saw no feasible options, and came up with a brand new one. He landed a passenger aircraft on the Hudson River, and everyone — everyone  — survived. RunPee Mom, who used to be an airline attendant, tells me no one survives an emergency landing on water. I assume this aspect led to the “Miracle” moniker.

The image of everyone standing on the wings as the Airbus plane slowly sank into the Hudson River is indelible, iconic perhaps.

(The rescue scenes in the frigid water reminded me of Titanic, another true-life-based disaster film, but in that case, only 706 out of 2208 souls were pulled from the water. I assume that’s because Tom Hanks wasn’t there to save them.)

Since everyone lived, there had to be SOME kind of plot jeopardy. In Sully, it’s the “blood sucking lawyers.” The climactic formal hearing was tense and well-structured: it perfectly illustrated the obfuscating influence of insurance companies needing to place the blame on someone. How about on the shoulders of the calm-under-pressure hero who saved all the people? Great, let’s go after him! He’s about to retire anyway.

I for one loved the simulation sequences. I’m a sucker for that kind of movie exposition. I liked it when they did it on Titanic, too. It’s an early version of Star Trek’s holodeck!

What else happened in this film? There’s the inquiry and the hearing. The simulations. Tom Hanks acting opposite a cell phone. Tom Hanks having traumatic flashbacks and nightmares. He gets a drink named in his honor: The Sully: Grey Goose Vodka with a splash of water. Get it? 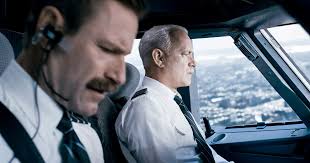 Aaron Eckhart had an agreeable role as the co-pilot. I appreciated that he had Sully’s back. He was there; he knew what happened (“BIRDS!”).  He loyally told everyone he trusted Sully’s judgement and was grateful to be alive.

Laura Linney, playing a thankless role as Sully’s wife, had absolutely nothing to do, stuck on the end of a cell phone, in the kitchen with their daughters. That’s one of the misfires of this film.

Mike O’Malley, playing the heavy, looks like he tried, but he still seemed to me like the sweet dad Burt Hummel from Glee, and it was hard to take him seriously. I’m glad he found a leading part in a good movie, but he was probably miscast — someone either scarier or more arch would have been a better choice. (Maybe he looked like the real person?)

Trying to make a side plot with some of the passengers didn’t pay off so well. Early on we are introduced to a trio of golfers getting last minute seats on the plane. That went exactly nowhere. There was also a woman with her wheelchair-bound mother shoehorned into the narrative, and that was a dead end too. It was a bizarre choice: what worked in Titanic with people’s personal stories was only a token effort in Sully. Those well-drawn characters are what made the Titanic film so immersive and enduring. We know what happens at the end, but you kind of forget the ship will sink, because you’re caught up in the story of Jack and Rose.

Maybe they wanted to pad out Sully’s 88-minute run-time, but if so, they should have expanded the film to have these side-stories resonate. Or don’t bother trying to put a human face on the passengers, and expand on Sully’s family watching the news, back home (again, as in Apollo 13). 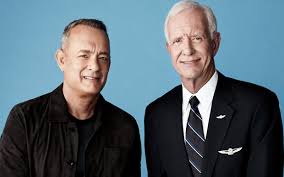 I really enjoyed Sully and don’t want to nit-pick on it anymore. It’s a feel-good true to life story, and an inspiring one.  What a relief to know that sometimes things work out.

By the way, Tom Hanks can carry an entire movie just talking to a volleyball. How’s that for good acting?  Who would have guessed from his early comedic films like Bosom Buddies and Big that he had so much talent? I think without him, this sometimes dry and definitely spare film would have felt like a documentary.

I also think the non-linear, almost Roshoman-type story structure helped keep the interest high. There are no world changing stakes, but things could so easily have gone wrong, and crashing a plane into New York City’s skyscrapers would have rocked the nation with memories of 9/11. We can be lucky Manhattan escaped this time, and we saw from Sully’s nightmares that this was entirely on his mind. What if? Thankfully, we never found out.

(Just thinking — maybe it’s time to move the NYC airports out of the city, like Denver did, closing down Stapleton Airport. The new one is safely out on the Colorado plains, and is a state of the art, lovely airport to get stuck in.)

Overall: Sully provides an easy hour and a half of entertainment, with a real-life disaster tale, a true hero, and a happy ending. You get to know a little bit more about the historical events and Captain Sully himself. I was glad to see it. Like I said, there’s too much bad news out there.