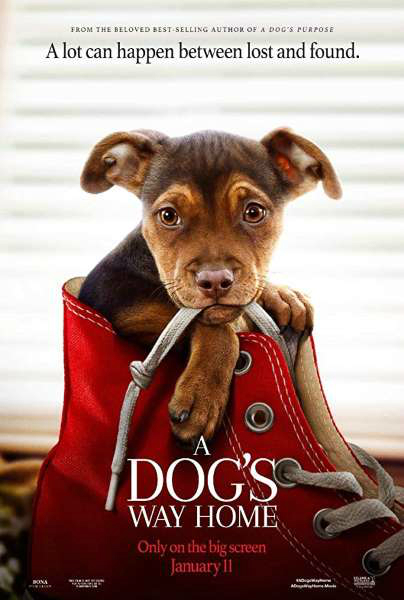 A solid B film where I ugly-cried six times, including within the opening three minutes. That’s got to be some kind of record. I wrote down how many times I cried as I jotted down notes for Peetimes (and my male companion cried three times, so it’s not just a girl thing).

In any case, I really don’t like movies that make me cry and try to avoid them, but since I saw the previous year’s A Dog’s Purpose, I felt I should see the ‘sequel.’ (A Dog’s Journey is not technically a sequel, but this is intended to a be part two of a dog trilogy in a shared universe.)


In any case, I’ve been referring to this as “The Dog Movie” — and that’s exactly what you get. There are a few people, some cats, and lots of pretty scenery, but for the most part you’re in the mind of a young part-pit pup who’s got a single-minded goal to play “Go Home”…a long, scary, and thrill-filled “game” that takes her over two and a half years, and 400 exhausting miles.

Bella’s not the world’s smartest dog, but she’s loving, loyal, and committed to reuniting with her human. I’m not going to give anything away, and while you probably can guess how it ends, a few things happen along the way that will surprise you.

For one thing, an almost unrecognizable Edward James Olmos has a couple of emotionally distressing scenes, and those will probably upset children.

Speaking of which: there were some little kids in my theater, and they were restive at times, because things get gripping and tense frequently. I don’t recommend letting your children see this alone, to be honest; you might get them back scared and crying. There’s a scene that’s even frightening for adults: I was legitimately freaking out watching a confused Bella try to cross that six lane interstate into Denver.

There were some weird filming liberties here and there, like a brief bit showing a moose (there are none in Colorado…but since this was filmed in British Columbia, we’ll just let that go). And the CGI animals were badly done, jarring me out of a few scenes where fake critters interacted with real ones.

Bella the dog was thankfully a real animal, and she did a fine job carrying the story on her canine shoulders. Bryce Dallas Howard narrated Bella’s thoughts, and was pleasing enough in an earnest way. Bella meets a lot of nice people along her journey, and I loved the bookend scenes with the disabled vets. No one really stood out though, which was appropriate in this kind of flick. The writer did a great job having the POV center almost entirely on Bella.

In the end, A Dog’s Way Home is a mostly-harmless fluff film that dog lovers will appreciate. You’ll forgive me though, for saying the Disney classic Incredible Journey from 1963 is still the best version of this kind of tale.

PS: These kinds of things do happen with animals. I had a beloved dog escape from my dog-sitter in Arizona and make it across the desert by himself to San Diego, CA. He arrived in a few weeks, with bloody paws and a lot of hunger, but he did make it, and we were reunited.

About The Peetimes: I have 3 Peetimes, and recommend the 1st if you can pop out early. Pay attention to the Peetime meta in this film and you’ll be okay with the second 2. (This movie is a series of repetitive travel scenes, intercut with emotional vignettes you won’t want to miss.)

Animal Abuse Alert: This movie has intense scenes of animals in peril. Children and animal lovers will find a lot of this movie disturbing — too many scenes to make them all into Alerts.

There are no extra scenes during, or after, the end credits of A Dog’s Way Home. (What we mean by Anything Extra.)

Movie Review – A Dog’s Journey – Manipulatively Emotional, But The Least Heart-Rending of the Dog Trilogy

chevron_left Highlights, Comments, and Acceptance Videos for the 76th Annual Golden Globes
Is A Dog’s Way Home a Sequel to A Dog’s Purpose? chevron_right