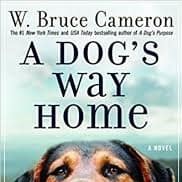 It’s sort of a sequel and definitely a reboot.

A Dog’s Way Home and A Dog’s Purpose, both written by W. Bruce Cameron, are intended as the first two parts in a “shared universe” dog trilogy. This is slated to culminate in A Dog’s Journey later this year.

What both current movies have in common — besides, you know, dogs — is a desire to make their audiences cry. So if that doesn’t sound like a fun time, neither of these films are for you. At least try not to see them alone.

Another thing that stands out is how morbid both stories are. Life, death, and life again are repeating motifs in what on the surface would seem to be harmless family films. [pullquote]I don’t want to spoil any plots, but some freaky things happen in both Home and Purpose that make me wonder what the writer intends for the final film in his doggie-verse.[/pullquote]

One thing you might recall from A Dog’s Purpose is how the titular dog, in one of his lives, has a swim rescue scene where the actual canine actor almost drowned. That kind of terrifying real-life event can go on to sink a franchise, and the new movie will probably remind everyone of Peta’s Purpose movie boycott action: “No amount of spin from Hollywood will change the fact that being forced to do a terrifying stunt is not a dog’s purpose,” said PETA Senior Vice President Lisa Lange in a statement. “PETA is calling on kind people to boycott this film and send the message that animals should be treated humanely, not exploited as movie props.”

So  I’m a little surprised a follow-up got greenlit, and that the writer returned to the death-theme well once again.  [pullquote position=”right”]There’s one section with veteran actor Edward James Olmos that’s so upsetting I’m shocked A Dog’s Way Home doesn’t come with a disclaimer.[/pullquote]

I mentioned above that A Dog’s Way Home is also a remake, because the theme of ‘pet crossing the country to get home’ has already been told a few times on the big screen. The 1963 live action Disney film The Incredible Journey features a bull terrier, a lab mix, and a Siamese cat who band together to cross a vast distance and help each other through many dangers…and it’s still the film to beat.

Homeward Bound: The Incredible Journey (1993) was a rebooted version with a few changes (this features the animals narrating, as does the one canine in A Dog’s Way Home), but is essentially the same story.

I’m willing to bet W. Bruce Cameron saw both of these movies.  🙂

4 thoughts on “Is A Dog’s Way Home a Sequel to A Dog’s Purpose?”