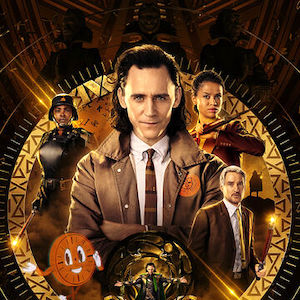 Loki was among the new wave of MCU TV series. It came out after WandaVision, and The Falcon And The Winter Soldier. The main difference, to me, was that Loki took off in a totally different direction to the film outings.  WandaVision led on from the death of Vision at the hands of Thanos while The Falcon And The Winter Soldier was all about the super soldier serum. Loki introduced the TVA (Time Variance Authority) and all the staff therein.

Unless you’ve been living in a cave for the last millennium and a half then you’ll have heard of Loki.  That doesn’t mean that the Marvel franchise has been going for over fifteen hundred years; I knew about Thor, Odin, and, obviously, Loki long before I picked up a Marvel comic.


Loki is a Norse god who still lingers in the real world…and not just in the MCU! The expressions: “Lokki sår havre i dag” (Lokki sows oats today) or “Lokki driver i dag med sine geder” (Lokki herds his goats today) are still used in several regions of Jutland to describe the mist that rises when the morning sun hits the dew on the grass.

Still, for our purposes, all we need to know is that Loki is Thor’s adopted brother and the god of mischief which makes him a bit of a tinker!

Justin Benson and Aaron Moorhead will be splitting directorial duties and all six episodes will be written by Eric Martin.

Characters, So Far, In Loki

All the returners are reprising their roles from season one. Ke Huy Quan will be a TVA Archivist and Rafael Casal will be in an, as yet, undisclosed “major role”.

Although the serials fit into the MCU phases (season one is phase four, season two is phase five) there is little that you’ll need to know from the films; the film connection was, pretty much, wrapped up in the first five minutes of season one, episode one. However, given the returning characters, you might need to have seen the first season; we are back in the land of the TVA!

There’s no mention of a third season in phase six but, to be honest, there isn’t a lot in it yet. As usual it’ll depend on viewing figures.