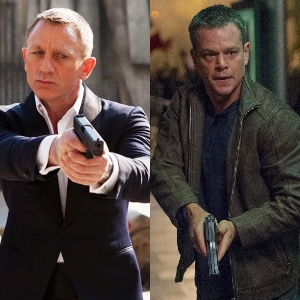 So what would be different, what would be the same, and what would just be similar? Is it a case of Jason Bourne being a slightly more up to date spy with an American accent or are the two characters totally different? Having covered the Bond franchise I suppose the first step is to have a quick look at the Bourne one; whether we do a full size set of reviews is yet to be decided but, to start with, I’ll just do a quick précis.


A Martini. Shaken, Not Stirred

Just as the Bond franchise had a TV outing that nobody talks about so there was a made for TV film made in 1988 starring Richard Chamberlain but, for our purposes, the first episode is 2002’s The Bourne Identity. In the grand tradition of espionage adaptations there are some very tenuous connections to the source novel but, as things progress, there is little connecting the books to the films other than some of the names.

We’re introduced to an unconscious amnesiac floating in the Mediterranean. As the story unfolds we discover that the floater has a particular set of skills and appears to be well funded and supplied. The rest of the film and, indeed, the franchise revolves around the people who originally employed Bourne (a government agency called Treadstone), why they‘re trying to kill him, and what he’s doing to get out of that particular sticky situation.

Get Some Rest, Pam, You Look Tired

I’d be tempted to say that the main difference between Bond and Bourne is that the Bond franchise is a series of different stories featuring a mainly stable cast of good guys and a series of different villains seemingly all bent on world domination. Alternatively the Bourne films are all, essentially, telling one story – Bourne vs Treadstone. Whereas Bond has battles against Goldfinger, Blofeld, Scaramanga, et al Bourne is constantly fighting against his former masters. Imagine Bond is purely focussed on destroying M and MI6 while they are similarly desperate to get rid of him and you get the gist of the Bourne franchise.

An obvious difference is the sheer bulk of the original books. In the Bond camp we have fourteen novels and short story collections by the original author and forty two by other authors including young Bond and Moneypenny spin offs. For Bourne there were just three original novels and thirteen by other authors. Usually this would be the point when we say that this is why there are twenty five official Bond films and only five Bourne outings. However, tempting as that assumption may be, both franchises rarely actually take much material from the original sources.

Another difference is the media used. As I said earlier, both had a pretty much forgotten start on TV before moving to the big screen. At least that is until the Bourne team took a sideways, perhaps backwards, turn to the telly box with the Treadstone series. I say it may have been a backwards step as, well, it didn’t last long. To some ballyhoo it was launched with a “special preview” on 24th September 2019 and the ten episode season started on 15th October 2019.

It was cancelled 17th December 2019. The given reason is that USA Network were moving to unscripted programming so there may be a reprieve on another channel but no one has jumped in yet. If I’m honest, I won’t be holding my breath until it does come back. It had the feeling that they thought there would be many, many seasons to follow and so they crammed in a lot of concurrent storylines and did have a busy, confusing air to it.

How Can I Forget You? You’re The Only Person I Know

Let’s start by having a look at the Bourne character. Jason Bourne is nothing like James Bond. Bond does what he does out of sense of duty to Queen and country. Bourne does what he does because he’s been conditioned to do so by a government agency. And, according to The Bourne Legacy, because he’s controlled by drugs. So while Bond is an undercover operative who has a remit to infiltrate organisations and gather information Bourne has a much more limited scope; someone gets in the way of Treadstone’s interests, Bourne, or one of his colleagues, gets rid of them.

In short Bond is a spy, Bourne is an assassin.

No Time To Die Again: Views Following A Bond 25 Re-Watch