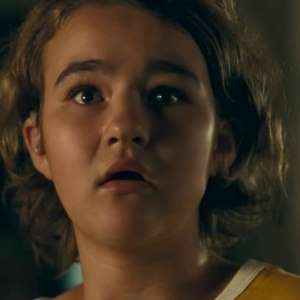 Is the girl from A Quiet Place deaf in real life? In a word, yes. The girl, aptly played by Millicent Simmonds, is deaf and speaks American Sign Language. And she’ll definitely be in the follow-up film, but presumably older, wiser, and quieter.

Representing Disability in A Quiet Place

Actor-director John Krasinski pushed hard to have a real hard-of-hearing/deaf actress represent the deaf community. Judging by Simmonds actions and reactions in the film’s narrative, it was a superb choice.

I think it’s very difficult to make this kind of sensory difference come out right, so I had to wonder — is this actress truly deaf? A stand-out scene that sent frantic chills down my spine had Simmond’s deaf daughter Regan alone in the cornfields. Indeed, Regan’s quiet as a mouse, unaware one of the deadly but blind creatures was behind her, just…listening.


Simmonds hit all the right notes and I hope she did her community proud. She’s not the first deaf actress to star in a big feature film, but this one is less about in-your-face deafness and more about using it as an unexpected tool of survival.

If you were one of the many movie fans pleasantly surprised by 2018’s sleeper hit A Quiet Place, you’re probably excited to catch the 2020 A Quiet Place II sequel. The original offered the right combination of refreshing cleverness, a terrifying plot that DOESN’T explain everything by the end, and ambitious hints of world-building… It’s a compelling work by the handful of actors in the film.

Emily Blunt, Millicent Simmonds, Noah Jupe (most recently appearing as Peter Miles in 2019’s wonderful Ford v Ferrari)…and John Krasinski himself round out a small but tightly scripted cast in this truly brilliant ensemble — then copied wholesale in Sandra Bullock’s slightly-less-stellar but still worthwhile futuristic horror-lite Bird Box. But can The Quiet Place follow-up be as good?

With great writing and a talented cast, all things are possible. I have hope. I’ll be at A Quiet Place II opening night…in shoes that don’t squeak, buying no snacks that can rustle. Seriously, someone in my theater jiggled a candy bag once and I thought they were going to get lynched. 😉

chevron_left A Real Conversation with my Passive-Aggressive Alexa
Is Harley Quinn in Birds of Prey a Sequel, Soft Reboot, or a Standalone Movie? chevron_right