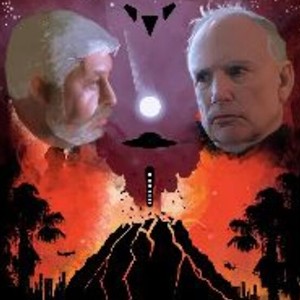 UFOs, or Unidentified Flying Objects, are a staple of sci-fi films.  From the White-House-destroying ship in Independence Day to the possibly more benevolent aliens in Close Encounters of the Third Kind to the terrifying alien abduction in Fire in the Sky.  (Okay, that last one’s based on a true story.)  But what if UFOs are real?

In his latest film, director Darcy Weir explores the connection between UFO sightings and volcanoes in Latin America.

There’s plenty of interesting footage of UFO encounters near volcanoes.  And they are doing things that airplanes, jets, and drones simply can’t do.  They land at odd angles on the volcano, enter it completely, or disappear close to its surface.

An interview with Stephen Bassett bookends the film, with a compelling theory about the UFOs and their purpose.

Bassett and Jaime Maussan are knowledgeable about the topic.

It’s cool to see the high-tech video cameras being used at the sites of active volcanoes.  The purpose of the cameras is to monitor volcanoes and warn scientists in advance of an eruption.  However, many people watch the live feeds on public websites to watch for UFOs.

What Volcanic UFO Mysteries could do better

The film moves kind of fast sometimes and glosses over fascinating topics I wish it would have explored in-depth.  Such as the government releasing information on UFOs this past April, Senator Claiborne Pell and his fascination with UFOs, Stephen Bassett becoming a lobbyist and producing a Citizen Hearing on Disclosure at the National Press Club, and the connection between UFOs and nuclear weapons.  With a slim running time, I feel like the movie could have explored some of these topics more fully.

A lot of UFO footage is re-used throughout the film.  By the time Weir explores a piece of footage in-depth, you’ve already seen it a few times.

The film is a little one-sided.  No real time is given to debunkers or anyone who doubts the existence of UFOs and extra terrestrials.

This is a fun documentary about UFOs that may inspire the viewer to do some of their own research on the topics presented.  The film has some interesting theories about why UFOs may be attracted to volcanoes and why the extraterrestrials are here.  It’s a quick watch that may open your eyes to the possibility of UFOs and intelligent alien life in the universe.

Availability:  Available to rent or own on Amazon and Google Play.