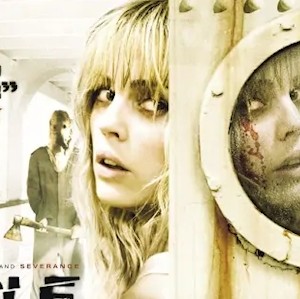 It’s funny how some films never get a chance because of a bit of marketing that doesn’t quite hit the spot, and so you just don’t bother looking past the poster. That’s what happened with me and 2009’s Triangle. The poster in question shows a blonde woman wearing a blood smeared top, holding an axe and walking on the deck of a ship which has blood splashes on the wall. She’s about to step into a huge puddle of blood with a reflection of someone that is not her, but a hooded figure in a boiler suit also carrying an axe.

My first thoughts were loads of blood, screams, and killings… so I thought I’d give it a miss. It turns out that Triangle does have loads of blood, screams, and killings, but there’s a bit more to it than that. It’s not a horror film or a ghost film per se; it turns out that it is a true looping film in the manner of Groundhog Day and Palm Springs — just not quite as regulated. By that, I mean Groundhog Day and Palm Springs both take place on a specific day and reset back to the same morning.


Triangle repeats when a specific set of actions are carried out.

Triangle starts off with a young mother (Jess – Melissa George) and her autistic son (Tommy – Joshua McIvor) going about their day. The scene is set such that it is obvious she’s a single Mum and not coping with all of the usual frustrations that everyday life brings. However, hope is on the horizon in the shape of an invitation to go sailing with the handsome, rich, and eligible Greg (Michael Dorman); I say rich because he owns the yacht they’re about to set off on. Also along for the ride are annoying (to me, anyway) couple Downey and Sally (Henry Nixon and Rachel Carpani) who’ve brought along the hapless Heather (Emma Lung) who’s been brought by Sally to set up with Greg, as she doesn’t know he fancies Jess and has already invited her along; don’t get too attached to Heather — she doesn’t make it to the second act. Liam Hemsworth rounds out the cast as Victor, who helps crew the boat.

The yacht, which is called Triangle (hence the name of the film), sets off into the Pacific sunshine as, in this case, Queensland is playing Florida. After a while the wind drops, a storm breaks out and, before you know it, the Triangle is upside down. I don’t know why, but Greg tells the passengers to put on life jackets and get to safety below decks while he and Victor stay up top without life jackets. All seems lost until the cruise ship Aeolus (scholars of Greek mythology will get a clue from that) sweeps into view and rescue seems certain.

But it’d be a pretty short film if things ended there; instead we are just starting on the loop. What actually happens is murder and mayhem carried out by person or persons unknown… until about half way through the film, or you are a good guesser, that is.

So events start happening and you begin to develop a feeling of déjà vu. As the various murders and assaults take place, you gradually see them from different perspectives. It’s a bit of a slow burn, as the first loop doesn’t reset until the forty-two minute mark. By comparison, Groundhog Day’s first loop starts at eighteen minutes. At least you’re meant to think that’s the first time!

I will say that Triangle is one of those films where I watched the first ten minutes or so over again going “ahh” and “oh yes” as I started picking up on where the loops actually were running.

There is another reason for the feeling of déjà vu… at least there will be for anyone who’s seen The Shining. As I’m a kind hearted soul, I’m prepared to say that the filmmakers have made a few nods towards Mr Kubrick’s masterpiece, and there are homages to it throughout.  The ones I spotted included action taking place in Room 237, the seemingly endless corridors in a similar colour palette to that used in the Overlook Hotel, the same axe (interestingly enough, not the same one that appears in the poster), and a scene when one of the characters discovers a load of bits of paper all with the same phrase repeated over and over. There is an appearance of a big knife, but that’s a different shape to any of the ones in The Shining.

Still, an interesting film that keeps you wondering where the loops start and end right up to the last scene.