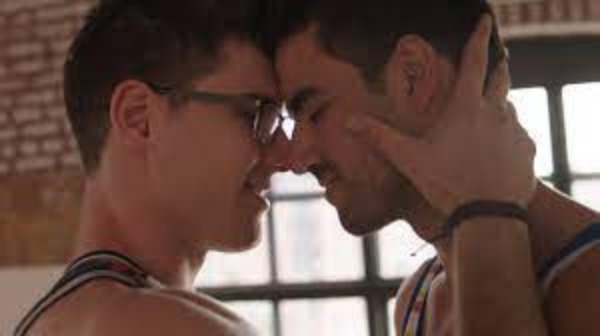 The first thing to know about Tu Me Manques is that it was Bolivia’s official selection for the Oscars.  While it wasn’t nominated,  it’s a damn sight better than the movie that won (Another Round).  Tu Me Manques is much more moving, meaningful, and emotional.  In fact, it will probably have a spot on my top 10 list for 2021.  Although with my Sundance coverage, that list is already getting crowded.  The title is French for “I miss you in me,” a statement about how two lovers become so close they feel as one.

The plot of Tu Me Manques

Tu Me Manques is about a gay man, Gabriel (Jose Duran), who commits suicide rather than come out to his family.  Gabriel’s father Jorge (Oscar Martinez) travels from conservative Bolivia to, well, much less conservative New York City to confront Gabriel’s partner Sebastian (Fernando Barbosa).  Meanwhile, Sebastian is creating a play about Gabriel.  From the first scene, the drama and the dialogue in this film are strong and on point.  The movie opens with a scene of Jorge accidentally opening a video chat from Sebastian.  I was hooked from there.  One of the reasons I chose this screener is that it’s a movie about grief and I’m writing a screenplay about the same subject.  This film says everything I want to say about grief and says it more eloquently than I probably ever will.  And I’m not even mad.

This is simply a beautiful and heartbreaking film.  Jorge struggles to understand his son.  His journey to acceptance is long and hard.  Sebastian channels his emotions into writing and creating in a way that is inspiring.  I loved watching Sebastian’s play become a transformative piece of art that affects the lives of the stage actors.  The fact that the movie is based on a true story makes it all the more cathartic.


The performances in Tu Me Manques

Martinez and Barbosa both give such compelling, fierce performances.  A good drama feels like real life.  And these two characters feel especially real.  I believed every emotional beat of their performances.  The supporting cast is strong too.  The movie takes the time to show Gabriel in flashbacks.  His relationship with Sebastian is sweet and romantic.  They are surrounded by several supportive friends, some of which provide the comic relief in the film (including Rick Cosnett and Dominic Colon).

What Tu Me Manques could have done better

As much as I love this movie, it could have done a few things better.  There’s a frame story that’s necessary but can be confusing.  The movie moves back and forth in time and it’s not always easy to tell where we are in the timeline.  (As with most movies that do this, like the excellent Two for the Road, haircuts and outfits can provide a helpful clue.)

There’s a brief exchange that could be biphobic.  The movie also ignores the possibility that Gabriel, who thinks he’s straight until he falls for Sebastian, might be bisexual instead of gay.

Finally, the ending has a twist that I’m not crazy about, but it doesn’t ruin the film.

Final thoughts on Tu Me Manques

This is easily one of the best films of the year.  Writer/director Rodrigo Bellott has made a masterpiece.  If you liked Luz, you’ll probably enjoy Tu Me Manque too.  It can be rare to see an LGBTQ+ story done well.  So it makes me happy to have already seen two of them that are so well-made this early in the year.

Availability:  Available to rent or own on streaming sites like Amazon, Vudu, Fandango Now, etc.

chevron_left Children’s Book Review: Harry Cat’s Pet Puppy – A Cricket in Times Square novel
Movie Review – The Conjuring: The Devil Made Me Do It chevron_right