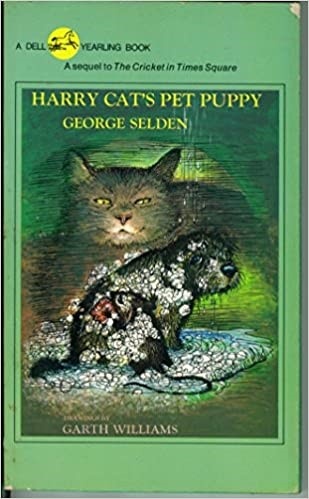 I’ve been really enjoying a re-read of many favorite childhood novels — in some cases a first-time read. Such is the case with Harry Cat’s Pet Puppy (1974), the third book in a series that began with the classic The Cricket in Times Square. As a kid, I adored the Cricket story and never knew there were sequels. I’d have been all over them had I known. So when I uncovered a box of vintage kid’s books, I decided to do ten minutes of a Legs Up The Wall yoga pose each morning, and read ten minutes of these stores. Since the books are only around 150 pages — and many with large hand-drawn illustrations to boot — the reading goes quickly. Many of these have been adapted into movies or TV children’s specials. I’ve been trying to track those down and link to them here on RunPee.

So how is Harry Cat’s Pet Puppy?

To be honest, the quality of characterization dropped a bit by this third novel. I was still engaged in the story, but this time around Tucker Mouse was just too neurotic and Harry Cat was a bit pushy and mean.


Tucker was always high-strung and energetic, but this time it wasn’t charming — he didn’t use that ‘Mousiekins’ cleverness to save the day, as in the original Cricket and its direct sequel, Tucker’s Countryside. Harry Cat lacked the signature warm nature that made him such a break-out character before. The titular puppy was sullen almost all the time, and the pigeon character was too over-the-top. The Siamese cat was cutely written by the end, but it took a long time for her to become a real character, and it seemed most of the cat interactions were unfortunately off-camera, so to speak.

You can write flawed characters in any book/movie, but you have to provide something interesting about them in the process. They should make you laugh or smile, or be somehow engaging in the thick of things. It’s a tricky matter. Author George Seldon walked that line nicely before. The third time here isn’t a bad story, but isn’t a charm.

There was also no Chester Cricket, in case that’s an important matter for anyone.

Maybe the cricket is a necessary component to make these characters gel properly. Instead of the well-drawn, sensible, kind insect, we have underwritten and overwritten old/new animals.

We also wander all over New York City with a sense of dread and bleakness. Maybe the author was going through a wintry period himself; it’s hard to say. This is a good book with a fine message about abandoned animals and tolerance, but it’s not as magical or fun an outing.

Perhaps the next novels get back to the sense of wonder and enchantment as before. From the title of the next book, Chester Cricket’s Pigeon Ride, it seems we get our favorite insect back. That can’t be a bad thing.

Some cute moments between the animals and a good message keeps this third book in the Cricket series going, but it’s a step down somehow. Harry Cat’s Pet Puppy is still a solid little novel, landing squarely in the B range.