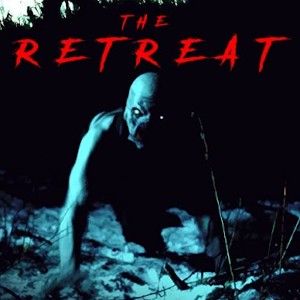 As is elsewhere recorded, horror is not my genre of first choice. But I make the effort for the good folk who follow us. So, here in the small corner room that is reserved for the team devoted to watching and reviewing independent films, I have just sat and watched The Retreat.

I’ll be honest and say that, in my humble opinion, it’s a bit of a curate’s egg of a film. There are good bits and there are less good bits and, as I’m a notorious softie, I’ll start off by talking about the good bits.

First off, the cast all acquit themselves very well

The main cast members are best friends Gus (Grant Schumacher) and Adam (Dylan Grunn), who are supported by an old man of the woods, Marty (Rick Montgomery Jr), a random friend Ryan (Chris Cimperman), a therapist (Peter Stray), and a fiancé, Amy (Ariella Mastroianni). Each part is played well and even the characters who we are supposed to be unsympathetic towards tend to get plenty of slack cut for them.


Now I want to take a moment to express my admiration of Rick Montgomery Jr, who plays Marty. At the turn of the Millennium he decided to retire from his life in the business sector and took up acting; within twenty years he racked up 120 acting credits. As someone who is used to making later on in life career changes, I salute you sir!

The locations are beautiful, well, the wild mountainous ones are

The swooping aerial shots are gorgeous. They’re probably done with a drone but, if you ask me, I’m OK with that if it means that those huge establishing shots come within the budgets of independent filmmakers. Down at ground level, it was more coppiced looking which could be almost anywhere where trees grow.

The monster effects are good

There appear to be different types of Wendigo in The Retreat, and I’m ashamed to say that I know so little about Native American mythology that I have no idea if this is correct or not. There is a quiet, watchful one with piercing eyes and antlers, who just seems to hang back inside the tree line, watching the proceedings… and then there is the bald, sharply toothed ones who like to get up close and personal and very bitey when the opportunity arises.

The story started off well

A very early scene shows Gus with the therapist being asked, “Where do you think you are right now?” so you know that he survives, which is always, for me, a bit of a drag on the tension when there are deadly monsters running around. Then we cut to best friends Gus and Adam going for a hike in the Adirondack High Peaks as a stag night alternative. Now if everything went smoothly there wouldn’t be a film; you can only watch people wringing out their socks and checking their blisters for so long before it starts to get tedious. As they start out, they meet Marty, who introduces them to the legend of the Wendigo and hallucinogenic tea, and from then on things start to go a bit runny.

And then things go downhill (not literally)

And, sadly, not just as regards the actual narrative. There are jumps in time and in reality. Popping back and forth along the timeline isn’t a big deal anymore, and so it wasn’t much of a problem. More of a problem was along the lines of just how many mushrooms did they put in that tea and is what I’m seeing a hallucination or what’s actually happening?

Normally things like that are resolved at the end, but in The Retreat we’re left hanging — not in a thoughtful, interesting way… more a case of they couldn’t think of a good ending, rather than a “let’s send them out wondering” situation.

One other minor niggle for me was there seemed to be a slight problem with the colour temperature; everyone seemed a touch too orange, and I don’t think that was a political comment.

So The Retreat was very nearly a good, scary film, and with a bit of light editing could find itself jumping up a couple of grades.