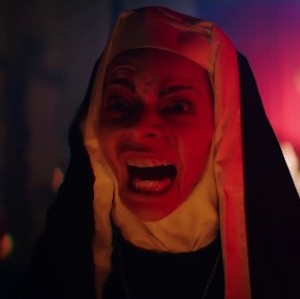 I don’t think it’s any secret that a film like The Parish isn’t exactly in my wheelhouse. It’s funny how I can happily accept and appreciate a make-believe world that has room for superheroes and super spies, but struggle with a world that has the supernatural running through it. Maybe it’s because the fantasy world is an out and out fantasy, whereas the supernatural is supposed to be an improperly explained aspect of our real world.

Unfortunately, for my engagement with that particular franchise, I don’t believe in gods, ghosts, spirits, souls, and everything else needed to buy into the whole thing.


Why can I kick back and enjoy watching how a billionaire, playboy genius can fly around in an iron suit or a guy working for a government department can save the world in a sports car fitted with rockets, machine guns, and an ejector seat, but struggle with the concept of a member of one of the many religious organisations battling with a demon that is specific to their particular belief system.

Perhaps it’s because technology is advancing by leaps and bounds and, eventually, everyone will be able to have at least the pants of an Iron Man suit and — fully tricked out Aston Martin aside — I know that Six actually exists.

What’s It All About, Then?

The Parish starts off with a scene of a bloodied and battered soldier walking around a scene of desolation, carrying a child. A quick cut goes to a woman sleeping in her car. The soldier walks towards the camera and, behind him, there is a huge explosion with another quick cut to the woman jerking awake. She is Liz Charles (Angela DiMarco), and she is joined by her teenage daughter Audrey (Sanae Loutsis). We then have the opening titles over shots of their car driving through a variety of towns representing their thousand mile journey. Then we find that the journey is for mum and daughter to move to a new house.

Why they moved isn’t mentioned, but what we do get is plenty of teenage “why did we have to move” and “I hate it here”. Then we get a lot of disjointed snippets.

Liz keeps dreaming about the soldier who, it turns out, was her husband; “was” because he died in Afghanistan. Daughter is an accomplished artist who tends towards drawing detailed pictures of her father. What I didn’t get was why, when Liz looked at the drawing, didn’t she mention that it was the same as what she had been dreaming. Maybe because of the copious amounts of red wine and tablets she’d been self-medicating with.

And It Doesn’t Work Because…

The Parish then moves into fairly standard, haunting/possession territory. Who’s real and who isn’t doesn’t get explicitly stated until towards the end, but you’d have to be developing truly Olympic level standards of naïveté not to spot the ghosts and ghouls.

Anyway, things develop in a fairly usual way leading up to the final resolution between a plucky priest and the evil entity. It’s at this point I always wonder what would have happened if the family had been Hindu, Shinto, or Buddhist.

So, for me, the big downside was the fact that things didn’t make sense or were properly explained; for instance it is never mentioned why these things are happening to Liz and Audrey. Obviously I can’t say too much for fear of spoilers, but there is a scene which unequivocally proves that Liz is seeing things — but that doesn’t stop her continuing to believe that those things are real and keep on badgering people about them.

It’s a shame that the story was so poor, as the acting, music, and photography were really rather good.