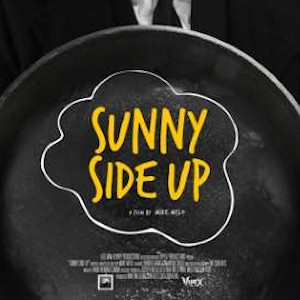 Sunny Side Up is a dark comedy with a love story at its center.  The movie focuses on Greg (Hunter Davis), a funeral director who is so self-critical that it becomes paralyzing.  While on a thirty day leave of absence, he meets a unique woman who may be able to help him cope with his devastating social anxiety.

What Sunny Side Up does well

One of the things this film does well is its portrayal of mental illness.  I don’t think I’ve seen another film that so accurately portrays what it’s like to have racing thoughts.  The competing voices inside Greg’s head become overwhelming for the viewer, just like they are for Greg.  Davis does a great job at of portraying Greg’s awkwardness and the simultaneous critical and soothing voices that live in his head.


The movie starts out slowly.  You have to wade through the hell of Greg’s anxiety to get to the romance.  When Emma (Samantha Creed) shows up halfway through, the movie picks up speed.  She seems like a manic pixie dream girl, but she adds a spark to the film.  Her humor and energy help carry the second half of the movie.

The title refers to the way Greg likes his eggs and how cooking them is his favorite time of day.  The sound of the eggs sizzling adds life to his lonely apartment (and seems to drown out his negative inner voice).

The end credit song is fun and infectious.

How Sunny Side Up could have been better

There’s an early scene where Greg is talking to one of the bodies he has to prepare for a funeral.  He even daydreams that the man is talking back to him.  This felt like a set-up that never fully paid off.  I wanted to see this happen more than once.  Maybe because it’s some of the most relaxed we see Greg in the whole film.  I want to know more about why he talks to dead bodies and why he feels so comfortable talking to them (compared to the living).

Part of the meet cute involves an awkward sexual scene.  It felt crass and out of place in such an earnest film.

Emma’s own mental illness is glossed over and could have been explored more.

For part of the film, the viewer may be led to believe Emma only exists in Greg’s mind.  In fact, I braced myself for this plot twist.  It should either have been played up more or confirmed sooner that Emma is in fact something Greg is experiencing in the real world.

At the end of the movie, I would have liked more resolution.  I wanted to see Greg’s return to work and how his interactions with co-workers and clients may have changed as a positive result of his journey.

Final Thoughts on Sunny Side Up

I think this movie could be cathartic or therapeutic for anyone dealing with social anxiety (or anyone who wants to know what it’s like).  It’s ultimately an uplifting film.  I would also recommend it to anyone who feels like no one will ever want them.

I look forward to seeing more from writer-director Mike Melo, Hunter Davis, and Samantha Creed.  Sunny Side Up is currently available on On Demand.