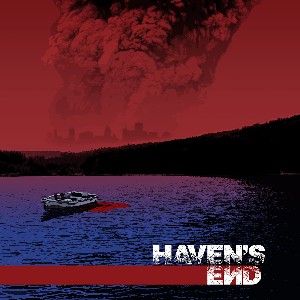 Ever felt like you just want to get away from everything?

Things are getting on top of you? Problems at work? Family difficulties? Civilization as we know it falling apart? We’ve all had days like that!

Haven’s End is the story of a group of friends having one of those days.


We open to the sound of sirens wailing, and an announcer talking about the chaos and mayhem that’s been going on throughout the city for, apparently, about an hour.

The first reports seem to indicate a coordinated terrorist attack.

Enter Alison (Catherine Tabor), who is an A&E Doctor, helpfully proven by wearing a “North GA Med” vest, who wants to get back to work so she can help out. Unfortunately, though, she’s suspended for saving a life (don’t worry, it’s explained later), and the idiots on the board won’t let her come back to work. Watching the carnage on TV is her fiancé, Derek (Anthony Nguyen). He’s a soldier off on sick leave, as proven by his “Army” T-shirt and a knee brace.

Enter Alison’s best friend, Jessi (Megan Hayes), who’s wife said that she’d like her to be with company to make sure she’s safe.  Jessi’s T-shirt says “#Hashtag” so I’m not sure what she is…

It’s The End Of The World As They Know It

Continuing ominous news stories on the TV are accompanied by explosions outside. As they get closer, Jessi’s wife, Stella (Ardale Shepherd), contacts her to say that things are getting out of control and they need to get somewhere safe; Stella is “in the know,” so they pay attention and head out of town… I would have been reaching for the car keys when the news that the big chicken was on fire! I’ve no idea what it is, but news like that is too surreal to ignore. Throw in the fact that this stuff is going on all over the world, and it’s either a huge terrorist operation or something else, so they head for the hills.

And all that only brings us up to the title card!

So Haven’s End is an “Oh my god, what’s going on, run, hide, and hope for the best” drama. Haven’t we seen dozens of them over the years? Well… yes, but, before you switch off and look elsewhere for your entertainment, there is more to this film.

Just Don’t Get Too Attached…

There’s more cast members to meet, more locations to explore, more situations to experience, and more genres to crossover into. There are convoluted personal interactions, long standing family disputes, pecking order quarrels, and mysterious external forces which prove dangerous to the point of fatality; don’t fall in love with all of the cast because you will be upset by the end if you do!

There’s always the worry that a story like this can become complicated and confusing, but Haven’s End manages to tell its story well.

Does it explain every little detail? No, but there’s nothing vital left unsaid. Let’s face it, there are plenty of other things that don’t get explained in other films and you don’t worry about them; for instance, how are vampires always so well turned out when they don’t have a reflection?

In Haven’s End we have an enjoyable way to pass ninety minutes. The acting is mainly serviceable; there are a few bits of chewed scenery, but not too many.

Some of the effects are a bit weak, but remember, they don’t have buckets of money here. The cinematography is very good throughout so I think Bryan Redding deserves a shout out. As does director/producer Chris Etheridge; I’d love to see what he can do with a bigger budget!

This is the End – movie review

chevron_left Is there anything extra during the end credits of The Marksman?
All the Bands and Albums featured in Vinyl Generation chevron_right