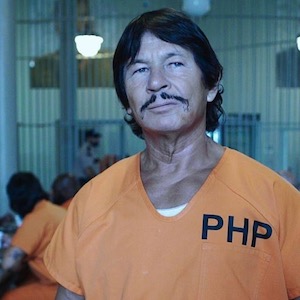 Time… it’s a funny old thing when you get down to it. Your top rank physicists say that time is only experienced psychologically and is fundamentally unreal. We all know time is a flexible concept; thirty seconds is a blink of the eye in the arms of a loved one, but seems to last forever if the same loved one is standing on something sensitive while wearing stilettos.


So I do wonder how Lawrence Hilton-Jacobs felt about appearing in Escape From Death Block 13? As is usual for one of my reviews, you’re probably thinking “What on earth is he rambling on about?” Allow me to explain…

Escape From Death Block 13 is a pretty formulaic film.  A man walks into a factory/office/club after money/information/revenge from the owner of wherever he’s just gone into. Things go badly and our hero ends up being framed for something or other. The detective investigating tells him exactly how bad things are at the moment and offers a way out; helps us to catch the bigger fish by rooting around inside the gang/prison/organisation.  Obviously, there will be oodles of mayhem and violence along the way.

This story, or variations on it, have been doing the rounds for ages; usually, the tough guy du jour makes at least one version of it.

You Are Such A Bleeding Heart Liberal, Paul

Perhaps one of the best known exponents of the, usually, straight to video, violent vengeance films was Charles Bronson; the American actor not the real life British psychopath. Incidentally, are there still “straight to video” films?  I know that quality wise there are but I just wonder what they’re called now that not even charity shops will accept VHS tapes any more. But, back to the subject in hand —  Charles Bronson, or Charles Dennis Buchinsky as his mum knew him — was renowned as the archetypal tough guy and set new standards in vengeance/vigilante films with his Death Wish series of films — the original, not this one.

Which is where my whole initial ramble about time comes from.

Escape From Death Block 13 stars Robert Bronzi as Miklos (Mike) Kovacs. Whether by birth, accident, or surgical intervention Mr Bronzi bears a startling resemblance to the late Mr Bronson. The Kovacs role is also very similar to those that Mr Bronson played; he actually played a character called Mike Kovac in Man With A Camera. So… so far, so contrived. What I thought brought an interesting circularity to proceedings was Lawrence Hilton-Jacobs as Agent Langley who makes the deal with Kovacs. A trawl through his IMDb page and you find his second role was an uncredited one as Mugger In Park #2 in, you guessed it, Death Wish!

So enough of my inane musings… what was Escape From Death Block 13 actually like? Sadly, the connection between Lawrence Hilton-Jacobs and the various incarnations of Charles Bronson proved to be the most interesting thing about it.

I said earlier that it was formulaic and, indeed, that’s what it proved to be. But I’ve probably said elsewhere (if I haven’t actually said it, I’ve thought it) following a formula isn’t necessarily a bad thing.

I mean, if a story wasn’t entertaining it wouldn’t get remade and, ultimately, become a trope. The actual story wasn’t too bad. I’ve seen similar a number of times in the past and have found them reasonably entertaining. They never really generate the excitement they are aiming for because you always know that the hero is going to survive to the end, regardless of how overwhelming the odds are.

What really let Escape From Death Block 13 down was the acting, the special effects, and just how far bits of it were from reality. I know that films aren’t shot in chronological order but it did seem to me that the acting got a bit better as things progressed; the early scenes were very stilted and unnatural but seemed to improve as the pace picked up.

The special effects were very low budget in that it was obvious how they were pulled off. Ultimately though I can forgive that as Escape From Death Block 13 is a low budget film. That doesn’t excuse the very obvious tailor’s dummy being thrown off a balcony. Just cut away and use sound effects, guys!

Never Leave Your Cell At Night

The biggest offence though was the divorce from the real world. I’m not American so I don’t automatically know about guns but it appeared that a couple of Miniguns were used. These fire at a rate of 2,000 – 6,000 rounds per minute. That’s up to a hundred rounds a second. Firing one of those into a crowd of people would devastate them; there wouldn’t be many still in one piece, let alone still standing. There’s also the “how many times can you be shot and just stand and flinch” thing which is not a hundred miles from the “how many times can you punch a guy in the face without making a mark on them” thing.

Then there’s the pretensions…were the number of slow motion doves or pigeons that were seen really meant to invoke memories of John Woo films? There is a Wilhelm Scream heard — not when the tailor’s dummy goes flying, but later on and a wee bit higher in the mix than usual.

And, I suppose, another nod to cinematic masterpieces is the main location. Pleasant Hill Penitentiary was played by Ohio’s Mansfield Reformatory, 100 Reformatory Road, Mansfield, Ohio, USA. Is that supposed to mean something to me? Well, it has been seen a number of times before: The Shawshank Redemption, Judas And The Black Messiah, Air Force One, Tango & Cash, and House MD all have spent time in and around the Mansfield Reformatory. Pity more of that history didn’t rub off on Escape From Death Block 13.