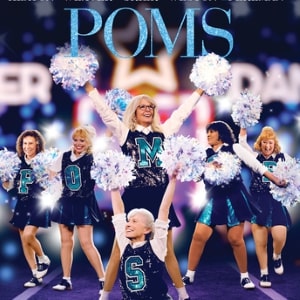 Poms is a cute little flick if you want something light and fluffy to while away an evening where there’s nothing more interesting on your daily watch docket. I caught this on an airplane seatback recently, and it did the job of keeping me mildly entertained while I sipped my tiny bottle of red.

What stands out here:  Diane Keaton just isn’t that exciting as the lead Poms character.

Every other actress adds something cute, funny, or mildly poignant to this tale of a golden years cheer squad. Keaton is stuck playing the straight man, and while she looks great, she’s not much fun. Not here. And not just because her character has a sad throughline…it’s more like Keaton barely had chemistry with anyone else, or barely made the effort to try. Still, I smiled at the rest of the cast’s antics and it’s the right kind of movie when you don’t want to be taxed or disturbed by your entertainment.


Personally, I plan to be rock climbing into my 90s.

There’s a bit of interest to be mined from ribbing the idea of this glorious retirement community positing hundreds of clubs — if you don’t like any, make your own! — as long as the club isn’t deemed ‘too dangerous’. And now I want to be in a cheering club in my senior years. As a snooty resortee asks, “Who will you be cheering for?” The exact right answer is, “Ourselves.”

NOTE: Poms is short for pom-poms, as in what cheerleaders shake (besides their booties). It’s not a movie about Pomeranians. So, don’t get too excited, dog lovers. 😉