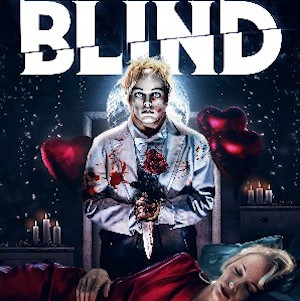 Starting on a positive note, Blind was very nicely shot with interesting, atmospheric images throughout; more than just a hint of Dario Argento. There were also some nice horror touches; cliff hangers set up, bad guys closing in, etc.

However, then things fall apart. The acting tends toward the plankish; the woman is supposed to be blind, not anaesthetised from the neck up. There is not much in the way of explanation; is Luke actually mute — or does he just have an attitude problem and won’t speak, we know that Faye is blind following botched surgery, but I picked that up from the trailer rather than the film.

Throw in the unexplained and unreferenced dream sequences and you’re just about there.

There are many other imponderables… Why does a blind person have so many lights, candles, and all manner of sharp and breakable things that can just be knocked over or walked into?


How and why is the bad guy there in the first place? Why do the cast look like other people? I think that Sophia (Caroline Williams) looks a lot like Jocelyn Wildenstein, and Luke (Tyler Gallant) would be placed in a Tommy Wiseau lookalike competition. The bad guy, Pretty Boy (Jed Rowen), looks like a 2 metre tall Ken doll, but there is no explanation of how he appeared on the scene or why he has fixated on Faye Dayne (Sarah French).

Marcel Walz (director) goes to the trouble of putting a cliffhanger in place, but then totally wastes it. If you’ve seen A Quiet Place you’ll know that (Spoiler!!!) there’s a protruding floor board nail and bare foot interface. A similar situation is set up here, but is then goes nowhere.

The sound cues are a bit intrusive as well; you aren’t allowed to think any scene is anything less than the height of tension, thanks to the pounding music and loud wumphhs whenever anything happens.

This could have been a good little horror/thriller with a few tweaks.