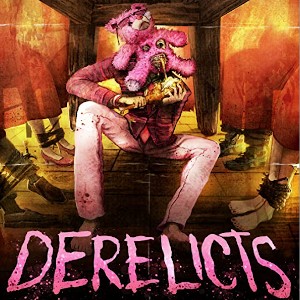 Films like Derelicts do make me worry for the friends that I’ve made over in the USA. More so than just the chance of them being shot by someone claiming to be defending his right to walk around bristling with weaponry, or catching something relatively treatable and being bankrupted. I worry that, over in the States, scenarios like we see in Derelicts may have a grain of truth in them.

My understanding of a horror film is that, for it to be scary, there has to be an element of truth and believability about it. For instance, you have to believe in ghosts for a ghost story to scare you, and you have to at least buy into the mythology of vampires, werewolves, mummies, zombies, etc. to worry about them popping in for a bite.

Derelicts is actually a Thanksgiving film


All that’s missing are a few members of their extended family, but they are driving over for lunch. Or are they? Will Uncle and Nephew make it? Of course they won’t!

Really, Rob, what is Derelicts about?

A quick look at the trailer shows that the meal is interrupted by a group of violent, psychopathic strangers. The Derelicts in question all seem to sport a variety of facial scars and marks; I think some of them are related, but I never picked up on the genealogy. I say that they all have facial scars, but one of them spends the entire time wearing a mask made out of a teddy bear… ah well, plus ça change, plus c’est la même chose!

There then follows your usual amounts of murder, mayhem, carnage, and catastrophe…

All of which are competently performed by the cast. The effects hold their own too. This is not going to be one of your mega budget affairs, seeing how the whole thing cost about $150,000, but it doesn’t look like it was done on the cheap.

There is enough gore to satisfy your average slasher fan but it is done with a reasonable light touch, and there is a thread of humour which takes the edge off things as well.

So, all in all, better than I was expecting!