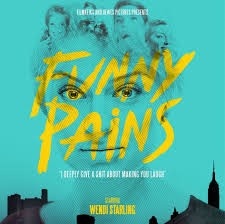 E.B. White once said, “Analysing humour is like dissecting a frog. Few people are interested and the frog dies of it.” And that is always a problem when it comes to documentaries about comedy, comedians, or humour in general. Either there are a lot of funny performance scenes, or a lot of serious talking heads footage, depending on how the director wants the finished film to be received.

With Funny Pains, Jorgy Cruz has done a very fine balancing act and presents a thought provoking, painful, and engaging look at the life and times of comedian Wendi Starling, which still manages to raise a few laughs along the way… not bad for a debut feature length project!

I’ll be honest and say that I recognised no one in this film, but that could be different for someone who follows the live comedy scene in the USA, especially in New York City.

There were a few groups sitting round just chatting and swapping anecdotes about life and performance incidents that provided or shaped their material. They were probably familiar faces to anybody who goes to comedy clubs or open mic nights just, unfortunately, not to me, but that didn’t stop them being entertaining and amusing.


But the main focus is Wendi Starling. The bulk of the film runs from 2015 to 2019, following Wendi from gig to home to work to gig and so on and so on.

There’s a nice balance between exploring the events that inspire her material and the delivery of the material. And those events are intense; most notably her struggles with bi-polar disorder, moving from LA to NYC, and being raped by two men at a friend’s wedding. Dotted through are very well recreated clips of her childhood and teens; so well done that I had to check the credits to make sure that they were re-enactments.

So, I would recommend Funny Pains if you like documentaries, live comedy, true life stories, or any combination of them all.

I do like a documentary! I give it an A-

chevron_left Is there anything extra during the end credits of Ammonite?
Indie Movie Review – Baby Frankenstein chevron_right