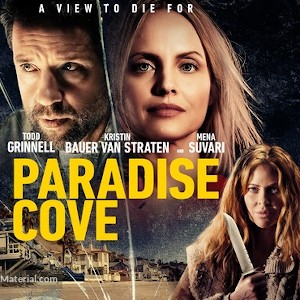 It is possible to make a nail biting thriller of a film around the concept of someone who isn’t the owner of a property refusing to get out and — against all expectations — get the powers that be on their side. Pacific Heights pulled this off in 1990; Paradise Cove has another bite of that particular cherry.

Knox and Tracey Bannatt (Todd Grinnell and Mena Suvari) inherit a house right on the Malibu beach from Knox’s estranged mother. Looking out off the balcony, he declares the property has a six million dollar view. His plan is to do the house up after a fire and ‘flip’ the property. They can then use the profits to retire on, and make a serious effort to start a family.  It’s one of those USA-only plot points which has medical matters governed by ability to pay, rather than clinical need.


I Must Go Down To The Sea Again

Obviously things start to go wrong, as per the law that says it isn’t a gripping film when everything goes to plan. It turns out that underneath the house, actually on the sand, lives Bree (Kristin Bauer van Straten). Now it turns out that Bree is as mad as a whole consignment of frogs, never mind just the individual box. Reasons for Bree’s tenure are mentioned and, more importantly, are reasonably believable. There are other areas where things fall apart, but I’ll come to those in a bit. Instead I’ll start out with the best bits…

First off, Paradise Cove has a marvellous cast. From the lead performers to the smaller parts; everyone was excellent. These guys are not, as is sometimes the case, sporting resumés filled with straight to bargain bin titles.

There are some seriously high profiles; perhaps not nosebleed high, but you will recognise the things they’ve been in and not just in a vague, niggling away in the depths of memory way… How I Met Your Mother, 24, Desperate Housewives, True Blood, 50 First Dates, and I could go on. OK, their names might not be at the top of the poster, but they were cast… repeatedly.

To The Lonely Sea And The Sky

The cinematography, courtesy of Massimo Zeri, is good. It’s helped by that six million dollar view, but everything looks good regardless of indoors, outdoors, day, night, or Sven under the house. The only thing less than spot on is the special effects — but, given the nature of Paradise Cove, there aren’t a lot of effects required. It’s a nicely shot film with a good and capable cast. So what’s wrong with it?

I have to say nothing drastic. It’s more a case of little things distracting you by being slightly off. For instance, when Knox and Tracey arrive at the house for the first time there is a BMW belonging to a lawyer (the registration number is ‘MLBU LAW’) parked on the driveway, and pulled right up to the garage door. Knox parks his truck right up against the rear bumper, meaning she can’t get out unless he moves his truck. However, seconds later she just jumps into her car and drives away.

Perhaps what is more troubling is the way everyone else deals with Bree. For no overtly specified reason, nearly everybody is on Bree’s side, or cutting her inordinate amounts of slack. She seems to be quite capable of any number of crimes up to and including assault and murder, but the police wriggle like a cat held by a toddler to try and avoid taking action, while the neighbours rally round whenever they’re needed.

So, there are a few stitches that shouldn’t be picked at, but, ignoring them, not a bad little film.