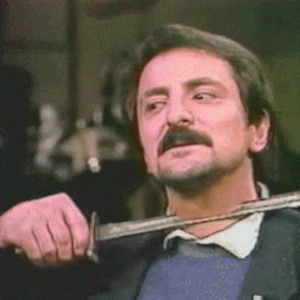 Lucky me! Two documentaries in one day. This one is about a guy who is, apparently a horror effects wizard. I assumed that I wouldn’t have a clue who he was what with me not being the big horror fan. Imagine my surprise then when I saw the first few seconds and thought “oh… it’s him!” Smoke And Mirrors: The Story Of Tom Savini is a documentary about the life of  Thomas Vincent Savini and I recognised him from his appearances in From Dusk Till Dawn, Planet Terror, and Django Unchained.

Smoke And Mirrors: The Story Of Tom Savini opens with a faux gothic theatre introduction, followed by a showreel of the man himself as actor, stuntman, director, and special effects legend.


The film proper starts with a potted history of the Savini family.

Tom talks about his parents and siblings and how they were influential on his development growing up in Pittsburg. He was the youngest of six children by over a decade and was, essentially, raised by five fathers and two mothers. Each had a different skill or attitude to life and each contributed to Tom’s future self.

Halloween To Me Is Like Every Day — It’s A Lifestyle

From then on Smoke And Mirrors: The Story Of Tom Savini is a series of talking heads, vintage photos, film and TV clips, home movies, and behind-the-scenes footage. Put like that it sounds terminally dull and boring but it isn’t.

The talking heads include George A Romero, Danny Trejo, Sid Haig, Corey Feldman, Tony Thompson, Robert Rodriguez, and Alice Cooper; those guys aren’t dull or boring! The vintage photos are interesting, especially the ones of him without his trademark facial hair.

While he is undoubtedly best known for his special effects work, you don’t get nicknamed The Godfather of Gore for nothing. He is also a fine actor both on the screen and on the stage. He spent time serving as a combat photographer during the Vietnam war and, like most normal men who go into that most abnormal of situations, he was suffering from a form of PTSD. It was returning to theatre that helped him. While in the theatre he got a chance to develop a skill that he started working on as a child…makeup.

Film Is A Truly Magical Medium

He’d been fascinated by makeup illusions as a cinema goer, particularly the work of Lon Chaney, after seeing the biopic Man Of A Thousand Faces. From then on, he had spent any money he’d made doing part time jobs on masks and makeup and learning how to use them.  He’d also been developing his physique, thanks to the example set by his brothers, both in terms of strength, agility, and grace. As well as being a skilled swordsman, he is an acrobat and, even in his seventies, he has a well-honed body that I’d be grateful for! That physicality saw him become an accomplished stunt man.

However, as is hinted at in the “Smoke And Mirrors” part of Smoke And Mirrors: The Story Of Tom Savini, his main claim to fame is his skill as a makeup artist. His guiding principle was to do the makeup “for the mirror rather than the stage”. By that, he meant that, in the theatre, you can get away with murder, makeup-wise. Things don’t need to be pin sharp because of the distance between the actor and the audience. Tom Savini wanted his makeup to appear flawless in the mirror…less than a metre away. The fact that this wasn’t noticed by the theatre audience was irrelevant to Tom; it had to be perfect on stage as well. This attention to detail meant that he could innovate and develop the art of makeup, so that his work looked totally realistic when projected onto the big screen.

By the way, this film has spoilers about how he did it!