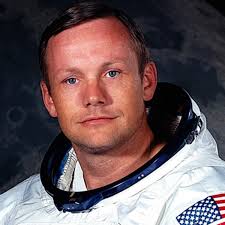 Hi. My name is Neil Armstrong, and that’s all you’re going to know about me.

First Man is a surprising film. It’s surprisingly devoid of excitement, I mean. Instead of a rousing tale of man’s journey to the moon, it focuses narrowly on life through the eyes of the taciturn and insular Neil Armstrong.

He’s a strange choice to be awarded the honor of the first person to set foot on another world. Buzz Aldrin was right behind him, but I guess being the second  man lacks cache. Even in Apollo 13, Jim Lovell and crew joke around, saying, “Armstrong? Really?”

Laying aside the fact that this man is very personal, I’d have thought he would have gone home and met with colleges, children, UN Summits, or otherwise directed his limelight to the service of NASA’s educational promotion. Nope. Not his gig.

This is a man that after an entire bladder-busting 2 & 1/2 hour movie, remains a cipher to the audience. Clearly, the had the Right Stuff to be a test pilot and astronaut, but had the personality of a Stoic.  And, well, the movie reflects this. Who was Armstrong? Did he even care about his wife…or the moon, even? All I can tell is he deeply loved his daughter, who sadly died as a toddler from brain cancer.

If you’ve seen the film, you’re probably wondering about Karen’s baby bracelet. Did he leave it on the moon? Is it still there, a testament to loving and grieving and family? It’s been a topic of some speculation. [pullquote]It’s known Armstrong deviated a bit from his walk plan, and stood over the Little West Crater for a few minutes. [/pullquote]The movie chooses to show him definitively tossing the precious bracelet into the crater. If he did this, I hope he was able to excoriate some of his demons and find a measure of personal peace. Because, well, walking on the FREAKING moon seemed, to him, a casual matter. Compare his still introspection on the Sea of Tranquility, versus Aldrin hopping joyfully along the surface. Sometimes I think singularly amazing moments are wasted on some people.  I don’t dislike Armstrong, but have to still wonder, like Lovell and crew:  WHY HIM?

So. Does First Man hew closely to what we do know of Armstrong’s life and vision? This excellent article from History Vs Hollywood covers the issue in a very readable fashion — no need for me to repeat it here.

[pullquote position=”right”]Suffice to say the director kept the biography as rigorously accurate as possible. We can feel the authenticity and sincerity bursting through the film. [/pullquote]The science was spot on, but the characterizations of the astronauts were a bit one-sided (ie — how Armstrong saw them), making for a possibly unreliable narrator. For example, Aldrin comes across as a somewhat offensive jerk in the film. Was he really? I imagine these things are in the eye of the beholder.

But back to the bracelet commentary — James Hanson, author of Armstrong’s autobiography First Man, reports that after many hours of personally interviewing him, he’s sure Armstrong left something behind.  He never said what, or admitted to it, but it’s known he did report his personal manifest list as missing to NASA. Then, he later donated his manifest to Purdue University, so it wasn’t so missing after all. There’s a lineage for astronauts leaving things behind. According to this article:

“For instance, Charlie Duke, who in 1972 became the tenth person to walk on the moon, left a photo of his family there, according to Singer. Buzz Aldrin brought a pouch that belonged to the Apollo 1 astronauts as a memorial to them.”

Armstrong’s manifest will be sealed until 2020, so we don’t have too long to know if Karen’s bracelet was on the list. [pullquote]His family hopes and believes he did leave that memento behind. We’ll see. It seems like a logical choice to me. But it did make for a nice bookmark to the movie, either way.[/pullquote]

Last thoughts for First Man: It doesn’t feel like a prequel to the (IMO) far superior Apollo 13 at all: keep in mind it’s NOT an adventure film. There are exciting moments for sure, but most of the runtime is silent and clouded with grief. I did enjoy the space scenes, what we got of them. But we also had to endure a lot of sorrow, silence, and unpleasantness between the space action. That might have highlighted the power of the rocket scenes, which were undeniably cool. I wish the movie had more of that powerful imagery.

Should you see First Man in the theater? I saw it in IMAX, which made the rocket scenes rumble, and the quiet scenes more tense. If you’re a real fan of NASA and the space program, it’s a must-see,  just to experience it properly. For everyone else, wait for the DVD.