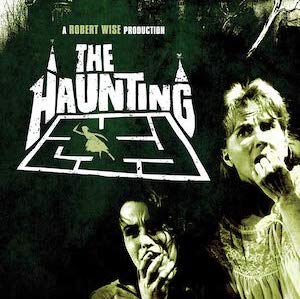 As we’re still hurtling towards the spooky season of Halloween I thought it appropriate to write a few words on another of my favourite scary films. This time it is Robert Wise’s 1963 masterpiece The Haunting. At the risk of being repetitive, it is the 1963 version I’m talking about NOT the woeful 1999 remake of the same name and basic premise. These two are a prime example of how you can make a genuinely spooky film just by using camera work and sound effects and fail miserably using the latest computer generated effects.

The Haunting is the story of Hill House, a house which appears to be haunted. It was built a century earlier by Hugh Crain for his new wife but she died in a carriage accident just before she turned a corner to see the property. To add to the unsettling nature of the property there are no right angles anywhere within it resulting in off-centre perspectives and doors that open and close by themselves. This was helped by shooting through a 30mm anamorphic, wide angle lens that added a curvature to the walls, making the house seem even stranger.


Whose Hand Was I Holding?

Whether this was the cause of the ill fortune that dogged the occupants is hard to say but few of the people that lived there came to a pleasant end. Hugh Crain’s second wife fell to her death down a flight of stairs. His daughter, Abigail, did live to an old age but she never left her childhood nursery. She died trying to attract the attention of her carer who was enjoying a romantic assignation. The carer inherited Hill House but soon after hung herself from the spiral staircase in the library. The house eventually passes to Mrs Sanderson (Fay Compton).

The story proper begins when Dr John Markway (Richard Johnson) gets permission to carry out some experiments in parapsychology and examine the paranormal activity occurring at Hill House. He brings with him Luke Sanderson (Russ Tamblyn); he is Mrs Sanderson’s heir and a condition of  Dr Markway getting permission to study the property. Dr Markway also brings along two women who have had paranormal experiences; Eleanor Lance (Julie Harris) and Theodora (Claire Bloom).

Just Someone Banging On The Door With A Cannon Ball

The house is staffed by Mr & Mrs Dudley (excellently spookily played by Valentine Dyall and Rosalie Crutchley). Valentine Dyall was best known for his deep, resonant voice and he was known for years as The Man In Black in the BBC Radio horror series Appointment With Fear. A late arrival is Dr Markway’s wife, Grace, played by Lois Maxwell who had recently started her run as Miss Moneypenny in the James Bond franchise. During her stay it becomes more and more apparent that Eleanor is becoming increasingly unstable. Her instability manifests itself as an growing obsession with Hill House.

Despite the frights and the dangers Eleanor encounters she becomes ever more deeply adamant in her desire to stay.  The rest of the film documents Eleanor’s descent into madness. As I said earlier, this version of The Haunting relied on camera work and sound effects to create the atmosphere. For the scenes in which the characters are tormented by loud, ghostly sounds coming from the house, Robert Wise had the sounds on playback so that the actors could react to them authentically. It was a technique that they found very useful and effective for creating just the right mood of terror.