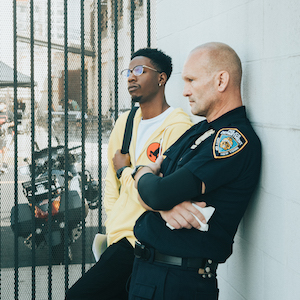 Well, what a GHD fuelled day this has turned out to be! While reading up about Groundhog Day For A Black Man I came across claims that the idea was stolen and turned into Two Distant Strangers. Always being able to find half an hour for a short film — and having a Netflix subscription — I hit search and gave it a watch to make up my own mind.

The claims arise due to one of the production companies (NowThis) handling first one short, and then the other.

So was the idea passed around?

The similarities are that the protagonist is an innocent black man going about his business, and the antagonist is a white policeman. The starting point is when Eric/Carter wakes up and the end point is when he dies. There are knowing references to the treatment of black people by the police. There is, of course, the whole Groundhog Day/time loop thing which has been used many times, even before the release of Groundhog Day, so that can’t be used as an argument.


And The Differences Are?

Perhaps the biggest difference is that whereas Groundhog Day For A Black Man is played for laughs, Two Distant Strangers is played straight. While both have a strong and important message — the same message in fact — they approach it in very different ways. Two Distant Strangers makes direct referrals to recent actual events; the first being a tribute to the killing of George Floyd.

There is one other huge difference between the two, but saying what it is would be a spoiler on the same level as saying “that looks like the US East coast” ten minutes into Planet Of The Apes.

Trust me though, this half-hour outing does give an entirely different perspective on the whole film. Maybe that’s one of the big advantages of short films…when there’s a big, The Sixth Sense style twist, it’s easier to mentally rewind and revisit everything you’ve seen and slot the new facts into the previous events.

Did It Deserve The Oscar?

As I haven’t seen the other candidates for the Academy Award for Best Live Action Short Film in 2020/2021, I can’t definitively say for sure that it should have won. What I will say, is that I’m sure there were more than five eligible films released in the COVID-19 extended entry period, that Two Distant Strangers ended up on the shortlist must give some indication as to the quality. That quality is not just down to the story and the emotional impact, but to everything that you see on the screen.

I’m an older person, so I know nothing about the non-thespian successes of Joey Bada$$ — I’ve probably got underpants older than him — but he acquitted himself excellently as the repeater Carter James. His love interest, who he wakes up next to every time, is Perri — played by Zaria Simone.

The other main character is the lethal Police Officer Merk, played by Cardiff’s own Andrew Howard, who you will recognise even if you can’t remember his name. Need a Russian gangster, a dodgy agent, or just a general thug? He’s your man. Mind you, I’ve been to Cardiff, so I can see where he gets it from.

The final thing that bangs home the message is the seemingly endless scrolling list of names of innocent black people killed by the police as they went about minding their own business.