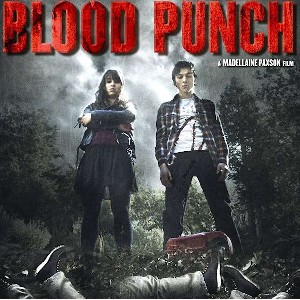 Blood Punch is an unusual little film. It starts off with our hero, Milton (Milo Cawthorne) waking up in a wilderness lodge on Tuesday. His first action is to run and throw up in a toilet. While he’s there he finds a screen, a load of wires, and a few other bits and pieces in the bath, with a big note saying “PLAY ME NOW” attached to it all. He obediently starts it playing and it’s himself leaving a message he wants desperately to get across.

So desperate that he cuts off two of his own fingers to make the point.


We then go back twenty four hours to a drug rehabilitation centre. Presumably a court-enforced one, judging by the way femme fatale Skyler (Olivia Tennet) is brought in wearing handcuffs. Her reason for being there is that she’s looking for someone who can cook up crystal meth from pseudoephedrine, and Milton is there because he was about to graduate in chemical engineering when both he and his meth lab got busted, ruining his sparkling future. Skyler uses all her charms and powers of persuasion to get Milton to break out of rehab and team up with her and her psychotic boyfriend Russell (Ari Boyland) — who’s managed to get his hands on fifty kilos of pharmaceutical grade pseudoephedrine and a buyer for the eighty five pounds of crystal meth they produced.

Blood Punch is like a combination of triangle Triangle and Groundhog Day. Like Triangle there is no fixed day; the loop starts when a specific condition is initiated but, like Groundhog Day, dying or going to sleep at night means that you wake up back at the start of the loop. All are Repeat…Until loops, in that they’ll keep going around the loop until they, first, find out what they have to do, and, second, carry out the necessary actions.

Another way that Blood Punch is like Triangle rather than Groundhog Day is that there are reminders, in the form of piles of corpses, showing that the days are repeating.

So, what we have is a Horror/Thriller then? At least, that’s how IMDb has categorised it. What it doesn’t tell you is that there is a very strong thread of very dark humour running through Blood Punch.

The way that Skyler breaks up the group therapy session at the beginning made me chuckle, and she proves to be quite the joker all the way through. I suppose it gets the “Horror” tag because there’s a vaguely supernatural cause which, like most time loop films, doesn’t actually get examined too minutely. Oh… and the dozens of bloody, brutal killings and woundings along the way.

Reality Is A Crutch For People Who Can’t Handle Drugs

I have to admit that I enjoyed Blood Punch much more than I thought I was going to. It had a very Indie, low budget vibe, but was executed in a very professional way.

The cast were all new to me; the three main players were all in the Power Rangers R.P.M. TV series, so, if you’ve seen that, then you might recognise them. Having said that, they do have a respectable amount of previous credits to their names; if they keep getting cast then they must be doing something right!

There were another couple of little anomalies. The first was that watching and listening to Blood Punch would make you think that if it wasn’t actually Hollywood born and bred then it was, at least, American through and through. However, while it was shot in California, most of the cast and crew seemed to be from a bit further afield… New Zealand to be precise! That place is a goldmine of cinematographic talent!

The other thing that made me prick up my ears and start flicking through my resources was the dealer/distributor Archer (Cohn Holloway). He had me checking that he wasn’t a long lost brother of Owen and Luke Wilson… he sounded and looked like he could be! Instead he’s been working with Taika Waititi on What We Do In The Shadows, Thor: Ragnarok, and Hunt For The Wilderpeople!

Well worth a watch.