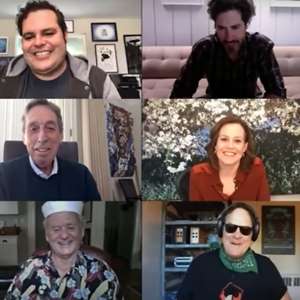 Watching this gives me the warm fuzzies. It’s so cool to see the cast of Ghostbusters reunited. To get a sense of their camaraderie, even after all these years (plus some behind the scenes tidbits) is a joy to watch.

But there are many more reunions to see.

Back to the Future with Christopher Lloyd, Michael J. Fox, and special guests. (27 minutes)


If you enjoyed that you have to check out this short guest appearance. (2:51)

YES! Jill’s one one to find a Lord of the Rings Reunion has come true! Here’s everyone you’re expecting — and some you’re not — in this 57 minute extravaganza.  Speak, Friend, and enter.

What other cast reunions would you love to see?

chevron_left Ranking the X-Men Movies
Movie theaters are opening on Friday! How to be safe and what we will see chevron_right