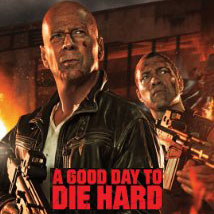 I’ve been a huge Die Hard fan from day one. I’ve seen every installment in the theater on opening day, and with each movie the question is: how does it compare to the original. So far I don’t think any of the squeals have been as good but a few have been close. Unfortunately this installment is near the bottom of the Die Hard list – just slightly better than Die Hard 2 in my book.

First lets talk about the action because that’s what we go to see these movies for, right? Overall it was pretty good but not great. There were a few impressive explosions and death defying leaps. The car chase through Moscow was decent if you can sufficiently suspend your since of disbelief.


The best thing that can be said of the action scenes is that there are plenty of them. In this short movie the action carries a significant portion of the screen time.

The acting is very bland all the way around. Early in on I was worried the movie was going to be embarrassingly bad. There were a few scenes with Bruce that fell flat. I’m going to blame the writers and director on that one. There’s no question that Bruce Willis can act and has John McClane down pat. There’s no way any of the movie’s shortcomings can be pinned on Bruce.

There were a few chuckle moments in the movie but nothing that made the audience really laugh. This is a Die Hard movie; there should have been at least 2-3 knee slappers.

I felt zero chemistry between Bruce and Jai Courtney. They never seemed to click together. That’s the biggest disappointment of the movie. If they could have nailed that then this could have ended up being an outstanding movie. Well, maybe not outstanding. There is still a lackluster script that holds the movie back from being all it could be. If the character development had been handled better, or at all, it would have been an improvement. Minus the credits there was only 92 minutes of film here. That’s just not enough time to introduce a new character in a movie that has so much action.

I’m not sure where they go from here. I think Bruce still has a few more Die Hards in him. But he needs a better supporting cast and a decent script.