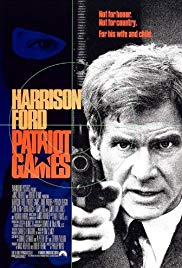 Another Sean Bean bites the dust

Patriot Games was always on my list of favorite films, up until some other good stuff came along (like the Harry Potter films, the Lord of the Rings, The Hunger Games, and even The Martian) to push it off my personal Top Ten List.

Still, it’s a very fine movie. Really! The soundtrack and Enya crescendos rocked. It was a fine emotional family journey. It just hasn’t aged as well as it did before the Information Age kicked in. The amazing things we see the CIA do are simply no longer that amazing.

[pullquote]It’s like, “Yeah, yeah, re-task the damn satellites;  I could probably do this from my cellphone.”[/pullquote] And the stand-out moment, where a cold analyst says, “That’s a kill,” well…it was a bone-chilling line at the time. But after a few long decades of CIA intel flicks, this doesn’t have the resonance it once had. We’ve become  immured to deaths we see from afar.
-----Content continues below------


[pullquote position=”right”]Don’t take this as a political statement: we now only feel sad when the “good guys” die. Who’s to say who is good, and who isn’t?[/pullquote] For far-away people caught up in a crusade that means everything to them and nothing to us, they must die. Fox Mulder of The X-Files understood the US government wasn’t as benign as they wanted us to believe. I’m just glad they destroyed the desert cell they intended to, based on absolutely no evidence and Jack Ryan’s hunch. (A sunburned man and a girl in a tank top. Really? Do we that casually wound and mass-murder in the name of justice?) [/end rant]

It was also filmed in a world of graininess. The climactic night scenes were hard to decipher, even though from my years of rewatches I knew this film like I knew my face in a mirror. [pullquote position=”right”]Harrison Ford pulled a perfect performance, and was awesomely reunited with James Earl Jones — his first major role since the voice of Darth Vader — in a film where Sean Bean makes one of his early many, many, many (MANY) movie deaths. [/pullquote](What a thing to list on top of your resume. Sean, my Boromir, I love you anyway.)

All this to say that what was once an A+ film has dropped, through no fault of its own, to an A-. [pullquote]We’ve had so many better films over the ensuing decades. How could I say this is a better film than the last batch of Mission Impossible flicks?  Or Jason Bourne‘s journey?[/pullquote] Just because I have a super soft spot for Patriot Games doesn’t mean it’s still the best bag of chips in the vending machine.

Movie Grade: A- (I feel terrible giving this a lower grade on my rewatch. Thank goodness Raiders of the Lost Ark, and Jaws, are still perfect films!)

NOTE: I need to rewatch the prequel Hunt for Red October, which I recall as an incredible film, even though Jack Ryan (and his wife) were played by other actors. I recall that the threequel was not up to snuff.  Thoughts?