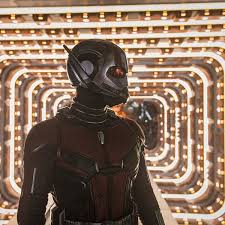 First off, it’s a Marvel movie, okay? You simply may not leave your seat until the lights come up. In this case, Ant Man and the Wasp is no different. Make your friends — and even strangers — “hold onto their butts.” (Ten points to Gryffindor if you remember where that quote is from.)

Spoilers for Infinity War and Ant Man & The Wasp ahead!

[pullquote]Some extra scenes/tags/stingers are fluffy fun, some add to the plot, and some hint at what’s to come. Some tease you in a sort of parody way, or just send you off with a little laugh. We’ve got a fine stew of all that in Ant Man 2, the 20th film in the Marvel Cinematic Universe.[/pullquote]
-----Content continues below------


My advice: don’t leave until the bitter end.

As the credits roll, for two minutes we see scenes from Ant Man and the Wasp as miniature models, highlights from the film. There are posed dolls; there are miniatures sets; it’s nice and all. Since this bit of Title Credits begins exactly as the movie ends, we don’t call this kind of thing an extra. It’s neat to see, though, with some good music to enjoy while you wait for the big anticipated mid-credits scene.

Some background first : Ant Man and The Wasp takes place roughly before/during/around the momentous events of Avengers: Infinity War.  Maybe most of their timelime happens during Thor: Ragnarok, which leads directly into Infinity War.

Seriously awful things happen in the last 20 minutes of IW. I saw it five times in the theater and still bawled like a baby. Peter Parker and Teen Groot destroyed me.

So when I say that I and the audience GASPED out loud in the crucial mid-credits scene of Ant Man 2, I mean it viscerally. It was a gut-punch that surprised us all. It was almost (ALMOST) worse than what happened in Infinity War. This reminder hurt.

[pullquote position=”right”]It’s not like the Ant Man crew are my favorite superheros, and while I’d hoped  this ‘small stakes’ lighthearted film would connect to the larger MCU, I was, by the end of the movie, lulled into a sense of contentment.[/pullquote] By then, I’d totally forgotten about The Snap. As the directors surely planned. When The Snap returned, during the mid-credits, making ash of Hank, Hope and the newly-freed Janet — simultaneously stranding Scott Lang in the Quantum Realm — I actually yelped in the theater. A huge audience “Nooooooo!” showed I wasn’t the only one lulled into complacency.

And that is exactly what the Marvel studios bank on. Light, fun  movie? Check. Awful last minute universe continuity meant to shock the audience — double check.

So, Scott is left alone in the Quantum Realm (to be fair, Luis, Bill Foster or even Ghost could retrieve him, and maybe he was immune to The Snap by being out of space and time…theories abound), but that doesn’t take the power of the moment away when Hope, Hank, and Janet disappear. Mic drop. End scene.

If you wait for the final, post credit extra, you’re treated to a hint of the world status, Post Snap. Streets are empty, while sirens sound in the distance. We pan through Scott’s empty house, in several rooms, see the TV switch over to the Emergency Broadcast System…and finally land on one of Scott’s giant ants playing his drums. Dire as things are, it’s still an Ant Man movie, providing a grace of comic relief, after the brutal reminder of the state of the universe.

The final nail in the coffin swiftly follows, when the screen fades to black and we see the title card: Ant Man and The Wasp Will Return.

Then a beat passes.

And a question mark pops up, to show: “Ant Man and The Wasp Will Return?”

Then lights come up and you’re left feeling like you saw a cutely made, well-done late phase MCU film: a rollicking good time with refreshingly small stakes (sans the very end).

My theory is that people we didn’t see dissolve are still with us. So, Luis is still in the front of the van. Bill Foster and his Ghost ward know how to operate the Quantum Tunnel. Getting Scott out may be a simple affair, and his knowledge of the Quantum Realm might hold the key to undoing Thanos’ damage.

It’s a long wait til 2019’s March release of Captain Marvel and the as-yet-untitled Avengers 4, due later that summer.

[pullquote]I do have a burning question: How did Hank Pym and family not know Earth was under attack by massive waves of alien monsters in Wakanda? You’d think this wouldn’t be the time for starting a risky new quantum experiment. Personally, I’d be glued to the news of world events.[/pullquote]

And for that matter, in Infinity War, how did Nick Fury, of all people, not realize his planet was in a serious state of war? Shouldn’t he be dialed in to everything the Avengers say or do, at all times? Running around panicking in NYC, he seemed strangely out of the loop.

Here’s the Mid Credit Scene from Ant Man and The Wasp, mixed in with the real-time last moment of Avengers: Infinity War. (2.3 minutes long.) You might need a tissue.

What do you think happens with Scott, the Quantum Realm, and the Post-World Snap?