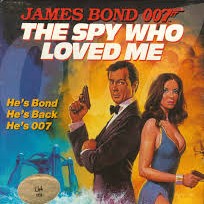 What is it about spies and the women who love them?

With the release of the Mila Kunis/Kate McKinnon spy comedy The Spy Who Dumped Me, there’s now a third movie riffing on the same title.

Here are the three movies in question, what they were about, when they came out, and the really good songs that open them:

In a James Bond movie that kickstarted this meme, Roger Moore does his somewhat serious/somewhat campy best to take down a megalomaniac villain (is there any other kind in these films?) who threatens the world with nuclear weapons in an effort to start a brave new world under the sea.

This is Roger Moore’s third outing as the British superspy, and it’s a well-regarded film (the tenth in the Bond series). It was gorgeously filmed on location in Egypt and Italy. Notable for the first appearance of “Jaws” — a relentless seven foot henchman with metal teeth — a set piece where Bond skis off a cliff, and an underwater car, The Spy Who Loved Me is considered a classic Bond film. And so is the intro song Nobody Does It Better, by Carly Simon:

Mike Meyers, in his second Austin Powers spy spoof, offered the world a chance to misbehave in The Spy Who Shagged Me. Meyers is notable in this second film of the trilogy for showcasing his weirdness in three roles: Austin Powers: International Man of Mystery, Dr. Evil: the villainous Goldfinger send up, and Fat Bastard: who is….fat. And not very nice.

This is my favorite film of the three; it’s the most fun and has the most cohesive plot, featuring Rob Lowe as the smary Number Two, Seth Green having a ball as the “Diet Coke of Evil” and space scenes that recall Bond’s 1979 Moonraker . Plus time travel. What’s not to love?

Just for fun, here’s another wacky song from the same film, with Meyers as Dr. Evil (and featuring Mini-Me):

In yet another playful version of the genre, The Spy Who Dumped Me opens nationwide this week. The tagline is Minimum Experience. Maximum Damage.

Of the plot, the IMDB reports: “Audrey (Mila Kunis) and Morgan (Kate McKinnon), two thirty-year-old best friends in Los Angeles, are thrust unexpectedly into an international conspiracy when Audrey’s ex-boyfriend shows up at their apartment with a team of deadly assassins on his trail. Surprising even themselves, the duo jump into action, on the run throughout Europe from assassins and a suspicious-but-charming British agent, as they hatch a plan to save the world.”

The film looks goofy. It could be good goofy or bad goofy — we’ll see soon.  Campy and goofy is at least in the grand tradition of these movies. Kunis seems to be playing it straight, while McKinnon seems a bit unhinged.  So far it has a 55% critic rating on Rotten Tomatoes, so it could go either way. Stay tuned for our review. In the meantime, here’s the trailer: