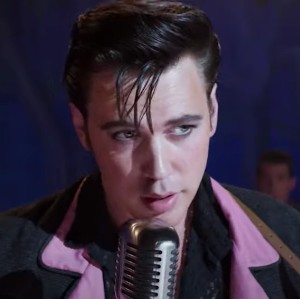 “The King” of rock and roll was a pretty quirky guy. The new Elvis movie hitting theaters this month will include some of the most interesting quirks and facts about Elvis Presley.

What does “TCB” mean and what does it has to do with the “Memphis Mafia?” What were Elvis’s last words, and what’s with the blingy lightning bolt jewelry?

We answer these questions and more below


Elvis Had A Stillborn Twin Brother

Elvis had an identical twin brother who was born 35 minutes before him. The twins were born at home and his older brother, Jesse Garon Presley, was stillborn. Jesse’s tragic birth impacted Elvis greatly and he spoke of his lost twin all his life.

Elvis was a natural blonde. He died his hair black because he thought it emphasized his features and made him more distinctive looking on film. The US Army didn’t allow soldiers to dye their hair so pictures of him during his Army years show his natural fair hair.

Like many strong, quirky characters, The King often used sayings and symbols to express his personality. There are many Elvis catchphrases, mottos, and inspirational quotes. But “TCB” was one of Elvis’s most famous mottos.

TCB means “taking care of business” and it became a key part of Elvis’s brand. His first TCB ring was made live on stage. He branded his private planes and much of his merchandise with “TCB.” The saying supposedly came from times hanging out with his inner circle, known as the “Memphis Mafia.”

In A Flash: The Meaning Of Elvis’s Lightning Bolt

After adopted “TCB” as his motto, he added the emblem of a “lightning bolt” to it. His famous lightning bolt ring and necklace, both of which you’ll see in the new Elvis movie, meant “taking care of business in a flash.”

Elvis had a lot of sleep and digestive trouble later in life, probably caused by his dependence on prescription medications. He sometimes spent so much time in the bathroom that he’d fall asleep on the toilet.

One sleepless night, when he was 42 years old, he went to relieve himself. He was dressed in his signature gold pajamas and carried the book, ” The Scientific Search for the Face of Jesus” with him. When his fiancé reminded him not to fall asleep, he answered, “I won’t.” Those were his last words.

Will his last words be in Elvis the Movie? Watch it in theaters on June 24th. And don’t forget to use Runpee’s Peetimes so you don’t miss any of the good parts!

Cynthia Larsen is a cat mom and writer working from North Carolina. She’ll be launching a substack newsletter about culture, creativity, and mental health soon. Until then you can find her on twitter.