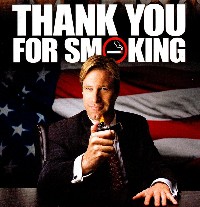 Bad guys are smoking in the Movies

It seems like smoking cigarettes is movie code for Villain Ahead. Why do the bad guys light up so much? It’s terrible for our lungs/longevity, but we’ve been brought up by the media to see smoking as cool and somewhat sexy (like a femme fatale), or miserably low-class (as in Danny Zuko from Grease). Of course, the good guys haven’t been smokers regularly since olden times (like those old cowboy flicks – think the Marlboro Man, and Clint Eastwood).

Here are some specific examples for villains who smoke, and it’s not just films using a Smoking = Evil trope. TV does it too: in Buffy The Vampire Slayer, when Angel loses his soul and becomes Angelus, the first thing he does is suck the blood of a woman who’s smoking. Then he leans back and blows smoke. (Video below.)


Basically, Angelus (bad guys) smokes, but Angel (good guy) doesn’t. The same goes for Spike, who generally only smokes when he’s bad — although there’s a little wiggle room on that one because Spike is always just a little bit bad. 🙂

In the recent update of BattleStar Galactica (and actually in the original BSG too), Starbuck smokes cigars. She’s one of those characters who’s sort of a hero, but often a bad girl who beats people up, drinks too much, and throws things around when she’s angry. She fits the Maverick trope. Dr. Gaius Baltar also loves his cigars, and he’s a character who’s firmly in the Lawful Neutral camp, if not an outright villain (this is infinitely debatable). The new Baltar’s painted in many shades of grey. Damn, I miss that show.

Many times a flick will have an ambiguously good or bad character, but if you pay enough attention, read between the lines and you’ll figure out what’s coming. In Fight Club, it’s not obvious who/what Tyler Durden is, but seeing him light up constantly makes a lot of narrative sense in hindsight.

Angelina Jolie’s charismatic bad girl character likes her smokes in Girl, Interrupted, which is almost a girl version of Fight Club, if you think about it.

In Peanut Butter Falcon, Shia LaBouf’s character only smokes in the beginning when we (and he) are unclear if he’s the bad guy. They literally talk about whether he and Zack are bad guys. It’s a really great moment that sums up the entire film in one economical scene.

Back to using our Spike example from Buffy:

It’s telling that after Spike gets his chip out and soul in, he’s super uncharacteristically mopey for half a season. Then after Principal Wood jolts him out of that in the infamous scene with the shack full of crosses, Spike throws his duster back on, snarls at Wood, and then lights up (he got his mojo back).

Then of course Buffy tells Wood she will kill him if he tries that shit again. 😉

Can you think of more characters using smoking as a character-building shortcut in film and TV?

Where is the house used in the filming of Knives Out?

chevron_left Weekly Peeple’s Poll Results for March 9, 2020
How we protect ourselves against CoVid-19 at the movies chevron_right