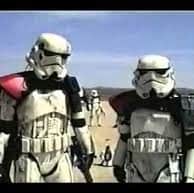 TROOPS is filmed live, on location. All suspects are guilty. Period.

I adore the Star Wars parody TROOPS,  featuring a cool and funny blend of the 80s television reality show COPS, with Star Wars: A New Hope. It’s got 10 minutes of cinematic-level goodness and is great fun. I’m super impressed with the visual quality of this tiny film. It looks like Star Wars! It even feels like Star Wars.

Storywise, it’s also clever, presenting a  behind the scenes look at how some Extremely Competent Stormtroopers try locate the Empire’s missing droids…and then exactly what went down  at the Lars residence on Tatooine. (Remember Uncle Owen and Aunt Beru? Remember how we saw their charred corpses? Now you’ll know what happened. This version is now cannon to me.)

Owen and Beru play a nice part in the latter half of the video, although it doesn’t show them in the most flattering light. But then, the show COPS pretty much depicted humanity at their nadir, so it fits in perfectly.  And I loved the first Stormtrooper in this short.  He really thinks he’s the good guy here, bringing peace and order to the galaxy (with blasters).

I never watched COPS when it was on the air (I don’t like watching other people’s misery), but I really love COPS parodies, to a fault. There’s a few of them out there. I think TROOPS might not be the single funniest one, but it might be the most spot-on, and does fill in a gap in the Star Wars narrative  —  one you never knew existed. Remember that most of the SW saga plays from a certain point of view…

What do you think of TROOPS? Did you ever see the original show COPS? Are we showing our age here? 🙂

3 thoughts on “TROOPS – A Star Wars Parody Does COPS”