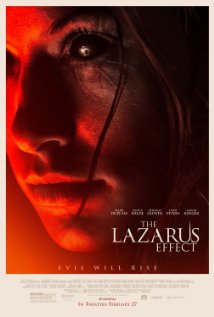 The Lazarus Effect was slow to start and once it got going it was over before I knew it. I think that was was my only gripe with this movie. I felt the beginning lacked a proper introduction to the characters and the ending was rushed.

The premise had potential — who doesn’t want to see a doggie brought back from the dead? Who wouldn’t want to save the woman they love? This sounds remarkably similar to Pet Sematary doesn’t it? The Lazarus Effect can’t compete with Pet Sematary but it wasn’t horrible.


There were a few creepy scenes that made me jump. The minimal approach they took with makeup worked really well. Olivia Wilde was super spooky. I think her facial expressions were the scariest part of the movie.

If you don’t go in with super high expectations, you’ll be pleased.