It’s hard to make a decent movie spoof for a beloved franchise, and being in the science fiction genre doesn’t make things any easier. The producers have to sell a fresh plot, quality special effects, and sparkling humor, while somehow keeping the fan base happy. You have to honor — while riffing– the base material. It’s a tight line to walk.

Two beloved science fiction spoofs not only stand out as Best in Genre full-length film satires, but have now have their own documentaries. That’s impressive for a parody.

If you’re a Star Wars or Star Trek fan, you’ve probably heard about Spaceballs and Galaxy Quest. Join me in discussing the cameo-studded documentaries about these fabulous science fiction movie parodies.

Lucasfilm actually did post-production for Spaceballs. Mel Brooks said George Lucas loved the screenplay, thankfully, since Brooks wasn’t going to go forward with Spaceballs if Lucas had a problem with it.

In the documentary, Brooks says, “to make a good spoof film, you have to love the genre.” Truth.

Not only did Brooks pull together a stellar cast for Spaceballs, the story was funny and reasonably sensible. Even better, there were film nods to other science fiction classics like Star Trek, Alien, Planet of the Apes, and even Superman. Spaceballs is a good romp.

Here’s the 1987 Spaceballs Documentary to get you back in the saddle for some silly Star Wars fun:

Ask any Trek fan to list their favorite Star Trek films and invariably Galaxy Quest comes up. Even the real Star Trek actors love it, and praise it to Klingon Heaven (aka Sto-Vo-Kor) in this documentary. When it comes to the best Star Trek films, Galaxy Quest is near the top for me. It also handles the fanbase with great esteem, letting ‘us’ help save the day (“It’s all real.” “I KNEW it!”)

Indeed, I loved the Galaxy Quest Documentary when it came out in a limited release in 2019. I laughed with all the other fans in a packed screening room, while we clued back into to why this…wacky  spoof…was so good. It told a real story. And FELT like Star Trek. It had a coherent narrative, gave us all the feels, and reminded us how amazing Alan Rickman can be with even the goofiest lines (“By Grabthar’s Hammer, you shall be avenged.“)

Here’s the trailer for the Never Surrender Documentary (not available free on You Tube Yet):

The Deadpool Before Christmas (2018)

Here’s the trailer if you somehow missed this Deadpool & Princess Bride Mashup:

And my review of The Deadpool Before Christmas:

I never get tired of Star Wars parodies. Do you? I am mean, really, Star Wars is beyond iconic.

Here’s a good one for you. Lots of cool little nods to the movies. Notice the green milk. Luke sure loves his colorful lactose. Green, blue…all good.

Seriously, this song is just fabulous. I think I like it better than the original in A Star is Born.  Enjoy!

I have a bad feeling about this…

I think Peter Jackson should have opened The Hobbit with this fan-film feature. It’s that cute. Even if you don’t like drinking shots, you’ll find this short amusing. I can see this (in my personal head cannon) as what actually happened that fateful night at Bag End, and why Bilbo joined the Dwarves’ expedition to The Lonely Mountain.

This musical one-off (to the tune of Shots, by Lil Jon) has good production values — I’m impressed. Some of the Dwarves look just like their movie counterparts, and leads me to wonder if some reprised their roles for this.

Alert: If you don’t like scenes of people drinking and getting wasted, this might not be the video for you. It depicts an alternate version of the Unexpected Party chapter in The Hobbit.

My Opinion: Jackson did an amazing body of work in the Lord of the Rings. We can’t deny that. But for various reasons, he made The Hobbit — one slim novel — into a full feature trilogy. It didn’t turn out well. The Hobbit’s best scenes are with Gollum, Smaug, and Gandalf. And, of course, his scenes with the Dwarves at home in Bag End. The Hobbit leads directly into The Lord of the Rings, showing us how the epic all began.

That’s kind of why I enjoy this spoof of the “unexpected party “at Bag End. I totally buy that it went this way, and NOT what was recorded Bilbo’s Red Book (his memoirs). After all, history has always been written/interpreted by the winners, who were not necessarily sober at the time.

Altogether, this is really cute if you’re a Middle Earth fan. Otherwise, skip it. I’d give An Unexpected Parody an A grade myself,  from the perspective of a life-long Tolkienphile.

Here it is, in one place. Every Star Wars video made by HISHE (How It Should Have Ended), up through Star Wars: The Last Jedi, or maybe Solo, if it’s up yet. If you haven’t discovered this web series, you’re in for a treat. Keep in mind that their solutions would offer vastly shortened movies, with plot points that seem obvious in retrospect (ie – having the giant eagles drop the One Ring into Mount Doom, instead of having the Fellowship truck all over Middle Earth and, in some cases, die along the way)…But here they all are, in an in-universe chronological order (and not including the animated movie/show, or the dreaded Holiday Special).

Star Wars: Attack of the Clones

Star Wars: Revenge of the Sith

Hey, this one’s not yet been made! So, like any good Star Wars fan, you’re going to have to wait. You still have a good half hour of HISHE videos here to enjoy.

Star Wars: The Empire Strikes Back

Star Wars: Return of the Jedi 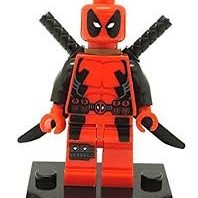 We can’t help but love Deadpool when he’s in full mayhem mode, with a collective body toll he’s given up trying to count. [pullquote]Yes, we love Deadpool — even when he’s just a Lego.[/pullquote]

Beginning with a Lego version of Deadpool 1, we move quickly through the Lego trailers/teasers for Deadpool 2,  to Deadpool vs Wolverine, followed by his teaming up with Wolverine. (Which is fun and odd, since we know he hates Logan). Then Deadpool takes on the entire Marvel Universe, and finally killing the entire world.

Yep, Wade Wilson clearly has problems. But watching him wreck Lego mini-film havoc is a joy. Don’t you wish you thought of making these?

Here’s some Deadpool Legos if you want to make your own You Tube shorts: