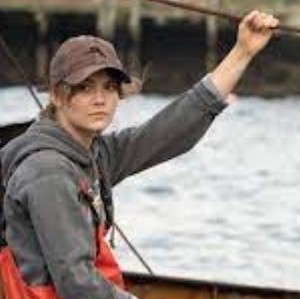 What would you do if you had to choose between taking care of your parents and taking care of yourself, between going after your own dreams or keeping the family business alive?  This is the dilemma faced by the protagonist of CODA (Child of Deaf Adults). [Editor’s note: not an uncommon situation these days.]

CODA swept up at Sundance

CODA set off a bidding war and set a new sales record, going for $25 million.  This beat the record Palm Springs set last year.  This was probably the most talked about film at Sundance.  It was an audience favorite and won the Audience Award, the Directing Award, the Grand Jury Prize, and the U.S. Dramatic Special Jury Award for Best Ensemble.


What CODA is about

Ruby (Emilia Jones) is the only hearing person in a household that includes her father, mother, and brother.  She works on the family fishing boat with her father and brother in the mornings before school.  She also negotiates the price for what they catch.  The business falls on hard times at the same time Ruby’s love of music starts to open up doors for her.  She is stuck between family obligations and pursuing her own dreams.

What I love about CODA

The characters are lovable.  Marlee Matlin and Tony Katsur are hilarious as Ruby’s oversexed parents.  They each also get a sentimental, emotional scene with her.  While the movie is technically a drama, it has a lot of laughs and even some romance.  It’s a feel-good movie and a definite crowd-pleaser.

It’s good to see some representation for deaf people on-screen.  With deaf characters and deaf actors largely absent from TV and movies, it’s frustrating that it may be awhile before we get another wonderful performance from Matlin.

CODA will stream on AppleTV+ later this year.

Is the girl from A Quiet Place deaf in real life?