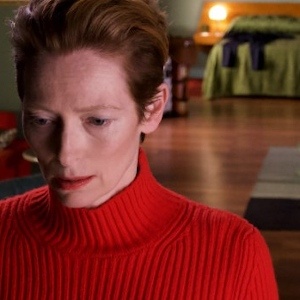 In other articles, I’ve spoken about how, when I was nothing but a young lad, there used to be a second feature. It was usually shorter in length to the main feature and, more often than not, you didn’t know what you were going to get; sometimes you’d sit there trying to see how long was left by the light of the luminous dial on your watch before the good stuff started, other times you were left thinking that you could watch that again rather than the film you’d bought the ticket for.

The Human Voice definitely falls into the latter category.


Shorts were often how people got their first chances to actually make a film — sometimes when they were in front of the camera but, more often, when they were behind the camera or nowhere near the camera, but hunched over a word processor.

To back up this wild claim I’d suggest having a look at the IMDb pages of a few directors, cinematographers, editors, make-up artists, etc. and you’ll find “(Short)” alongside a fair few of their earlier titles.

What makes The Human Voice different is that the director is none other than Pedro Almodóvar; the most celebrated and acclaimed Spanish filmmaker since Luis Buñuel. As if to prove my point, this is Almodóvar’s thirteenth short film, ten of which were made before his first feature Pepi, Luci, Bom.

The Human Voice is based on a monodrama written by Jean Cocteau and premiered in 1930. In short, La Voix Humaine is set in Paris and is centered around a woman speaking to her lover of some five years on the telephone. He is telling her that their relationship is over, as he is marrying someone else the next day which, not surprisingly, sends her spiraling into a crippling depression.

The original version consists of just the lead actor and what she says into the phone handset; the other side of the conversation is not heard.

In Almodóvar’s version, there is a slight break as Woman is seen visiting a large hardware shop, buying, quite worryingly, an ax. She returns to her flat and settles into a routine of sorts. This settling-in period takes up the first third of the film; Woman doesn’t answer the phone until ten minutes into the running time of this thirty-minute film.

What helps with this is that Woman is played by the ever-wonderful Tilda Swinton. At this point I’ll just go into one of my reveries about how unconventionally gorgeous Tilda Swinton is; she is stunning in the same otherworldly way that David Bowie and Prince were, and Annie Lennox and Ruby Rose still are.

But I Have Been Compared To Both Good And Bad Directors

So what do Almodóvar and Swinton bring to this particular party? The obvious first thing is the vibrant colour palette being used throughout. Even the hardware supermarket looks spectacular, despite the fact that it was a genuine, working, Spanish version of B&Q. The flat is built on a film set. “Well, obviously!” you might say, but what I mean is that it is not hidden that the flat is a set on a soundstage, and there are times when the action moves around behind the sets.

Why is the “willing suspension of disbelief” being pushed to the limit? No idea! It might be that the whole thing had to be filmed under COVID-19 safe conditions or it might be a whim of Almodóvar. Regardless, throw in a spectacularly wardrobed Swinton and it never stops being eye-wateringly beautiful to look at.

One difference that Almodóvar brings to his version of The Human Voice is that the original thirties version had Woman sinking into despair due to the loss of her lover, whereas this outing has an empowered Woman, well… that’d be telling!

This is a truly gorgeous film which deserves to be seen, and I think that the second feature idea should be brought back. I honestly believe that cinema audiences would pick up if there were more second features which you got to see as a bonus.

chevron_left Is there anything extra during the end credits of The Green Knight?
RunPee Weekly Newsletter #73 (August 4th, 2021) chevron_right